Loading up in the van was a different experience this time. We left our house empty and sold, storing a few things with our parents but heading out with the rest of our belongings. Andrew and I decided to quit our jobs and drive west in the van to ride bikes in the mountains. Most of the people we told weren’t surprised and Andrew and I joked that we were the last to know we were doing this. 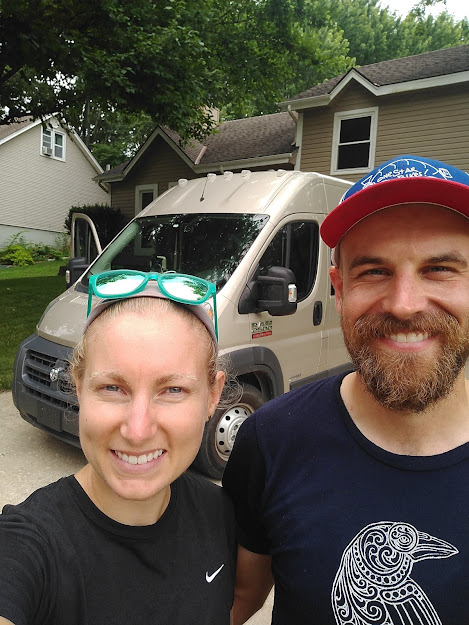 There’s no doubt that touring the Great Divide Mountain Bike Route in 2018 changed me and Andrew. I left part of my soul out in the mountains and I think about our ride every day; so it’s appropriate that our first stop was Marshall Pass near Salida, right on the Divide route. Along with the Divide, the summer of 2019 was pivotal for us. We had some incredible experiences in the outdoors and on the bike. We had meaningful conversations and personal interactions with people we’ve looked to for inspiration, which hit differently than watching from a distance. We talked with real people who’ve made big decisions to have flexibility in their lives to spend time doing what they love. We realized that we have the opportunity to make those decisions ourselves. We’re planning to live out of the van for the next year (or until we run out of motivation or cash) checking off bucket list routes and destinations. 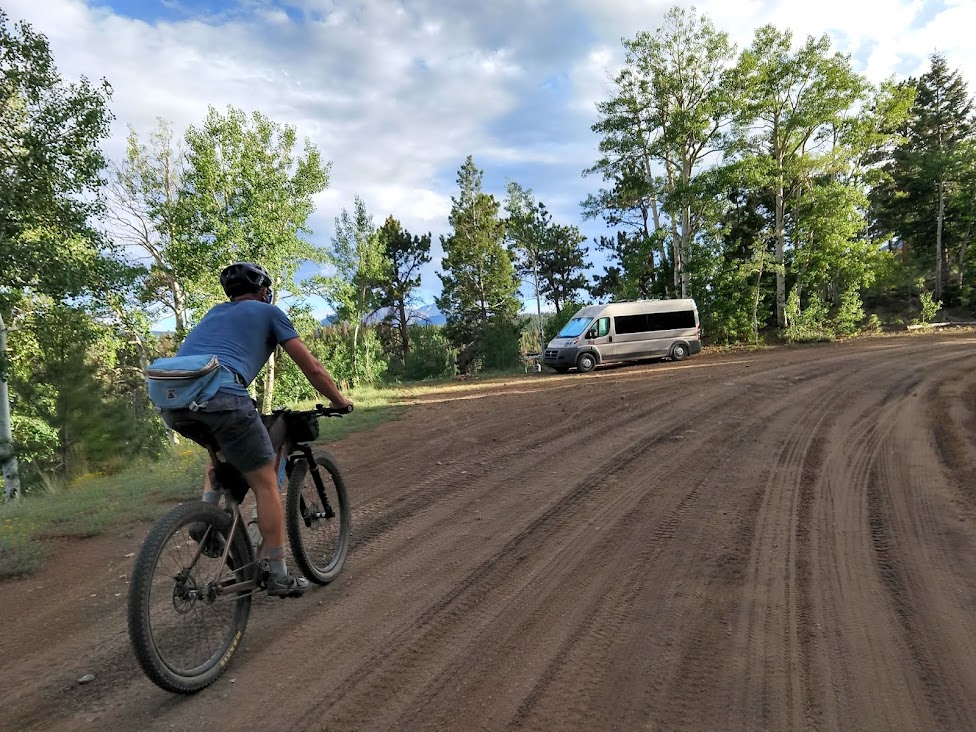 We were accustomed to going on weekend trips and making it out to the mountains every few months before the coronavirus hit. We are glad that we can start spending more time bikepacking, even if it looks different than before: being more selective with where we travel, taking more food to minimize stops, wearing masks in public, and sending only one of us into grocery stores.

So here’s what you really came to read about: the Vapor Trail route from bikepacking.com is one we’ve been eyeing for a while. We love high alpine routes with plenty of singletrack, scenic vistas (who doesn’t?), and a little bit of suffering- the route offered just that. 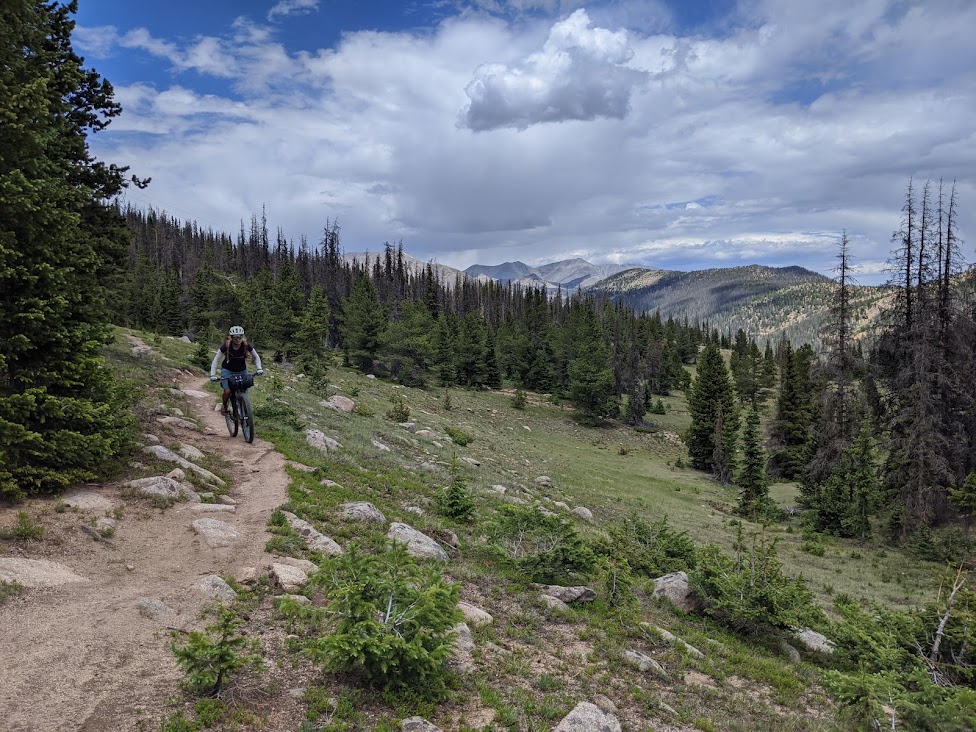 Since it’s been a while, packing took forever. I was trying to fit too many things into too few bags. Plus, the night before we made a ton of pasta and procrastinated due to a food coma. We figured it out though and even brought a few luxuries like a stove, dehydrated meals, and an excessive amount of cookies (thanks, Dan!). 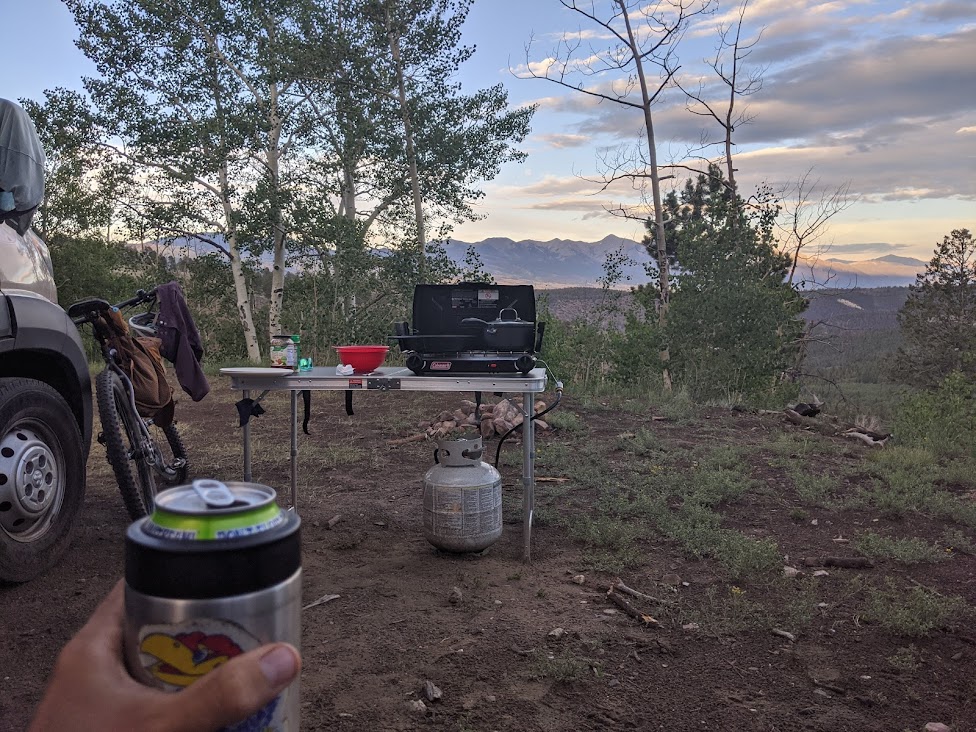 I had a few gear changes that I tested in KC, but the mountains can test new gear in a whole different way.

1. After my experience on the Colorado Trail last year and after growing a few new toenails, I converted to riding with flat pedals and hiking shoes. I was more comfortable hiking, and most importantly had zero blisters at the end of the route.

2. I tried wearing a bigger pack (12 liters) to minimize weight on my bike. I felt more confident handling my bike on technical terrain and it was much easier to push and pick up my bike during hike-a-bike sections.

3. I’ve been riding singlespeed for a while in the midwest, but this was the first time I was brave enough to try it out in the mountains. I love how connected I feel to the terrain with one gear and the meditative state I experience riding singlepeed. 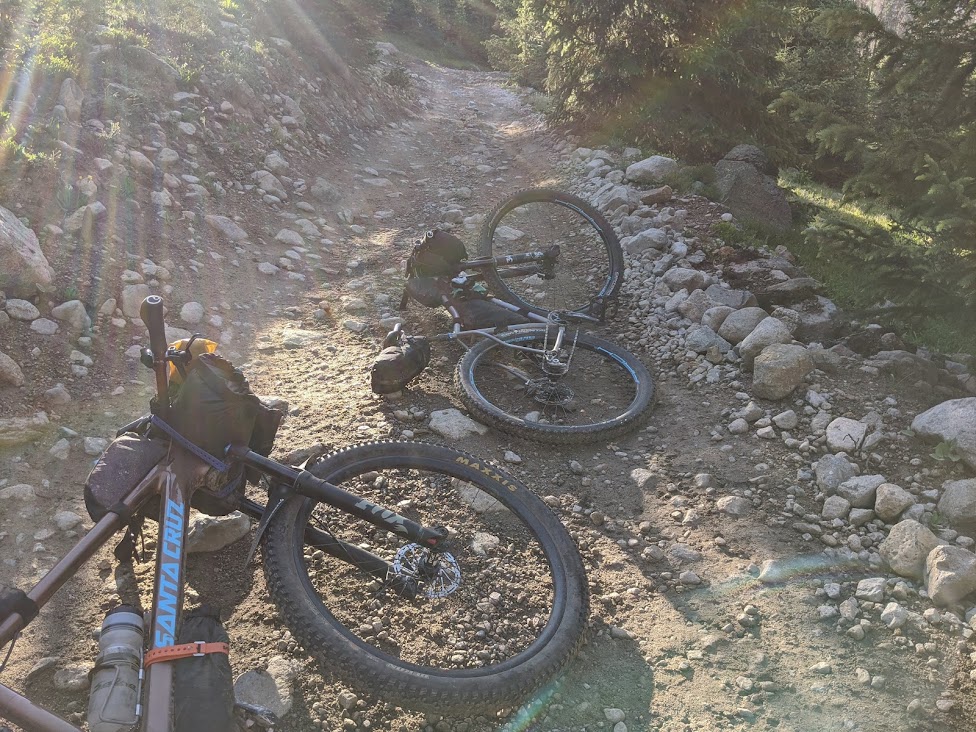 The Vapor Trail route starts in Salida, but we decided to start where we parked partway up Marshall Pass. This meant the first part of the route was 10 miles downhill. The route went from pavement, to gravel, to singletrack, then hike-a-bike as we rode on section 14 of the Colorado Trail. Andrew and I reminisced about our CT experiences last year. As we rode, we had some rain and ominous thunder but not enough to go into full primal fear mode. 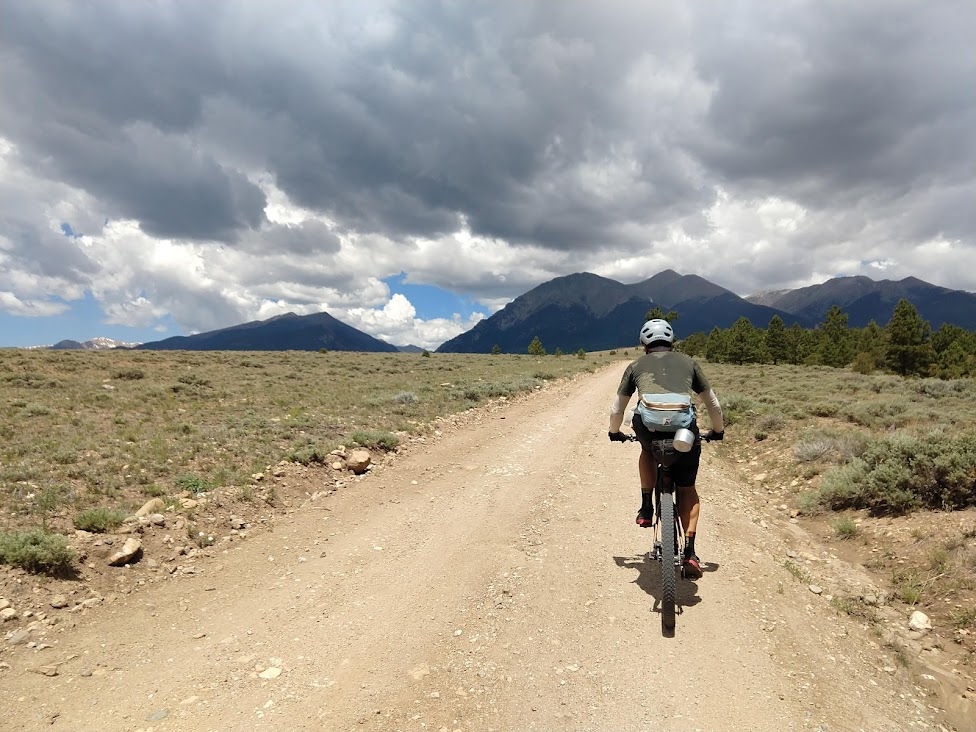 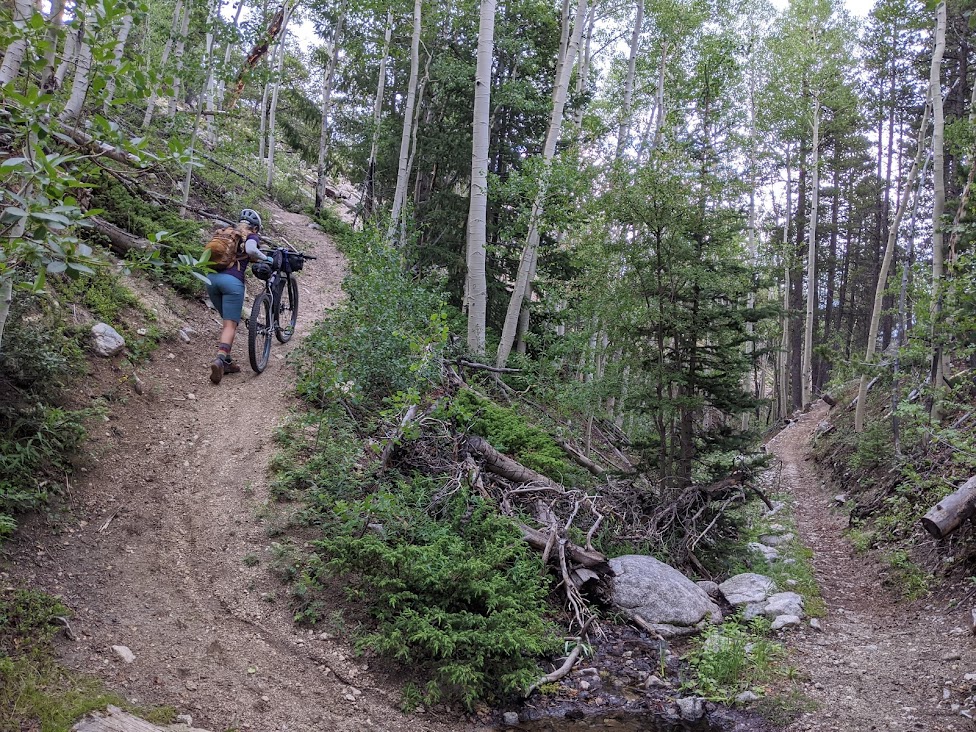 We descended down Raspberry Gulch before hopping on a rail grade with a view of Mt. Princeton. We eventually traded the view of the mountains for riding in the forest on a county road all the way to St. Elmo, an old mining town with lots of ORV tourist traffic and a small general store. From St. Elmo, we continued climbing to get to Tunnel Lake Trail. We rode and hiked up to 11,800ft before descending a few hundred feet to the ghost town of Alpine Tunnel. The railroad tunnel was at one time the highest in the world and was operational from 1882 to 1910. 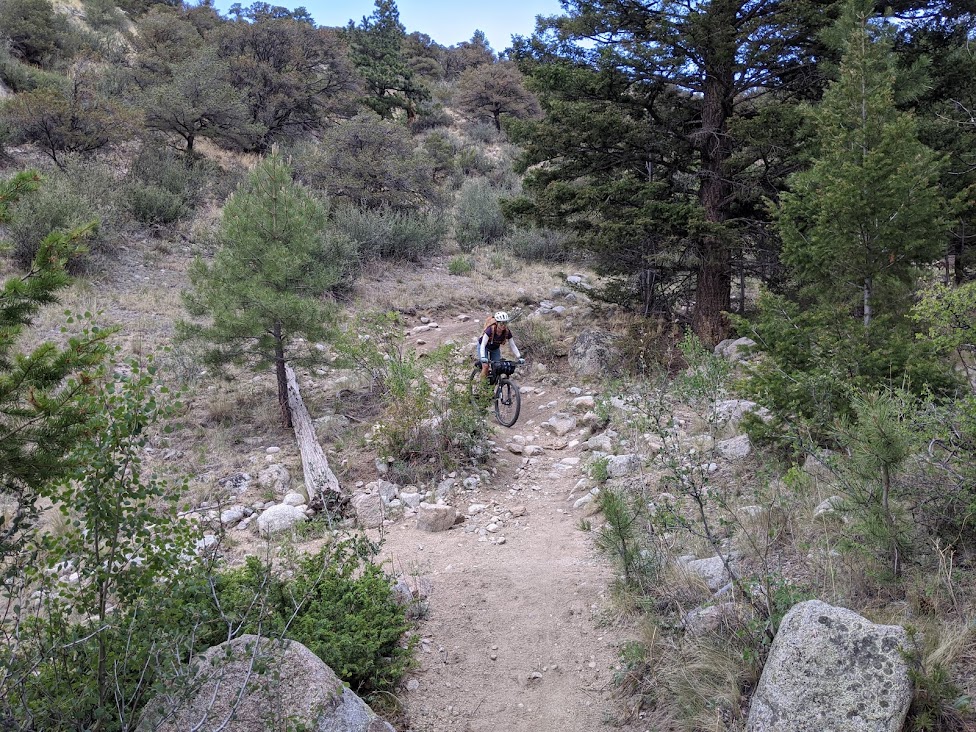 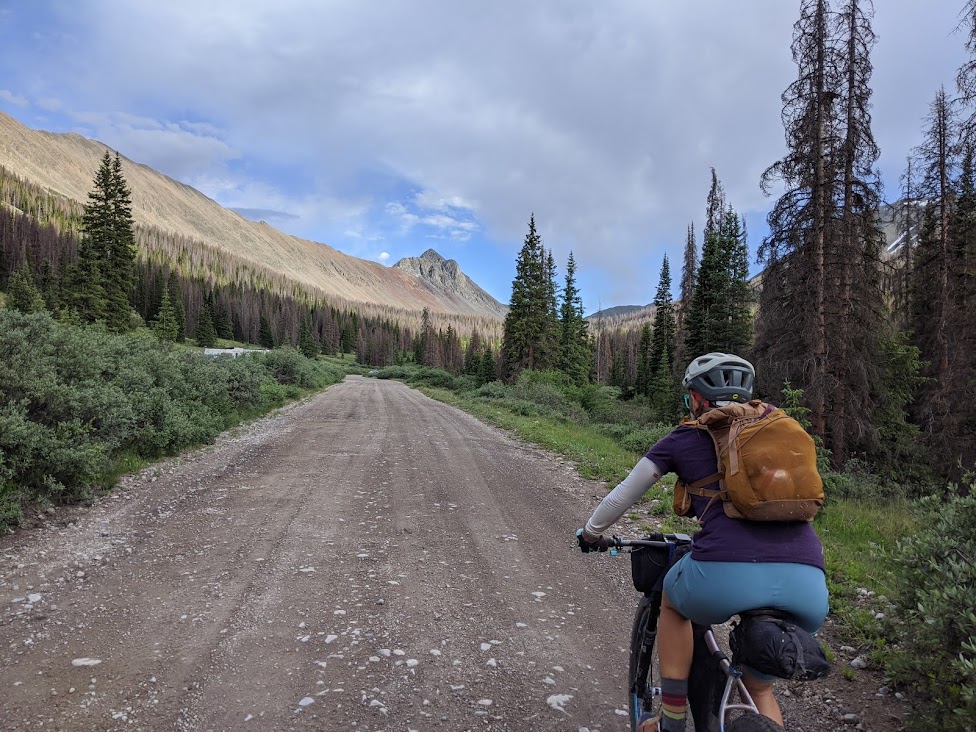 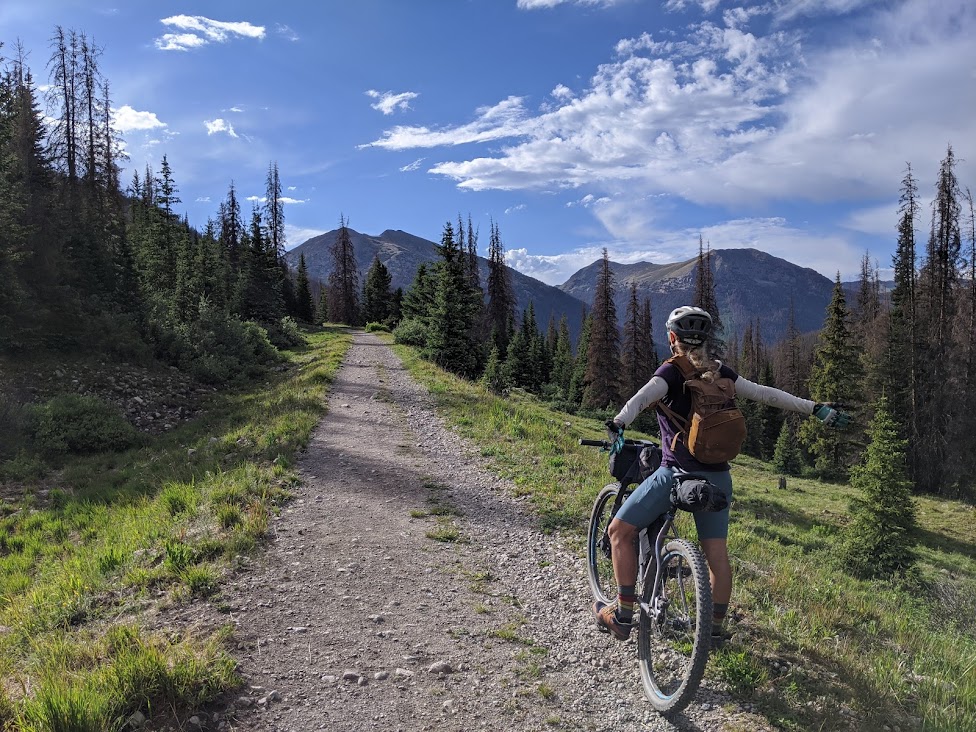 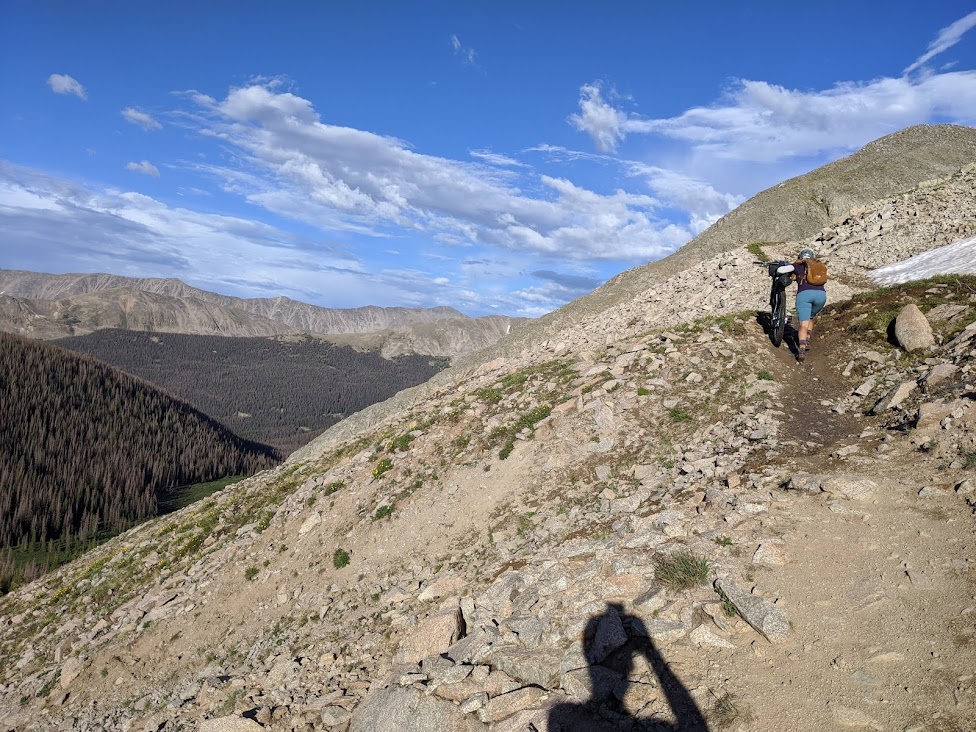 We cooked our dinner and camped at Alpine Tunnel, 53 miles and 7,100ft of climbing into the route. We planned to stop sooner, but there are limited camping options between the CT and St. Elmo. Past St. Elmo, we returned to national forest land, but the allure of a ghost town was too great to stop just a few miles away, so we pushed a bit longer. Before we went to sleep, we contemplated knocking out the whole route in 2 days (rather than the 3 we planned). The words moderation and bikes don’t typically compute in our heads, so we decided we’d shoot to get it done. 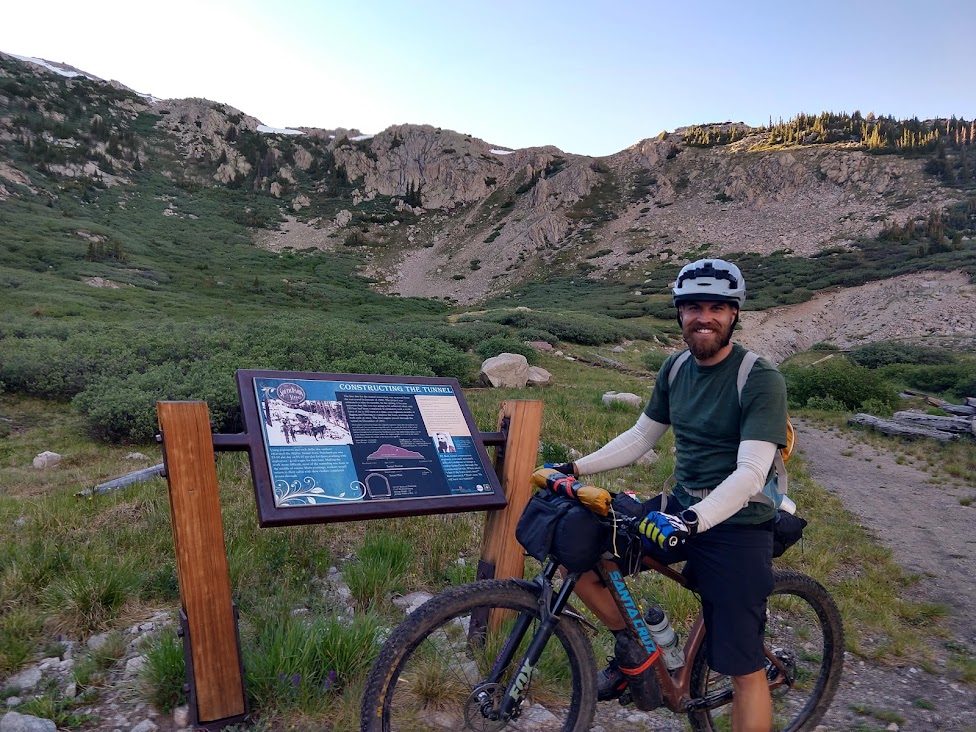 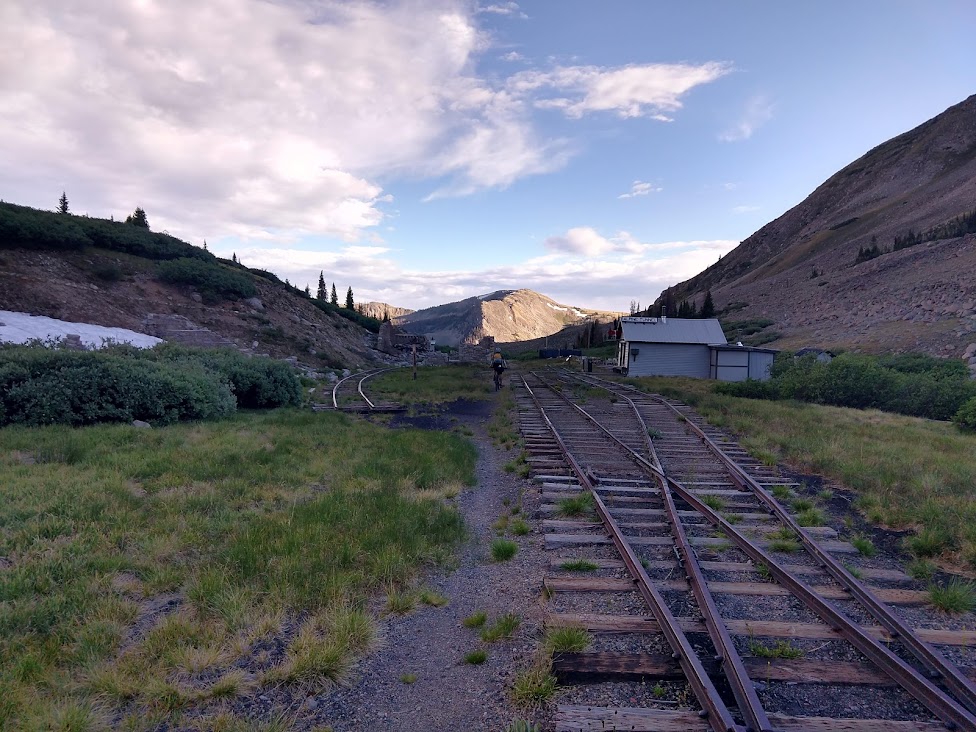 In the morning we ate oatmeal and descended a few hundred feet before climbing to Tomichi Pass. Next, we started Canyon Creek Trail and were quickly off of our bikes for a long hike to the high point of the route. We took a sit and breathed what little oxygen was left at 12,570ft. The gnarly climb was followed by an incredible descent down Canyon Creek Trail, a highlight of the route for sure. 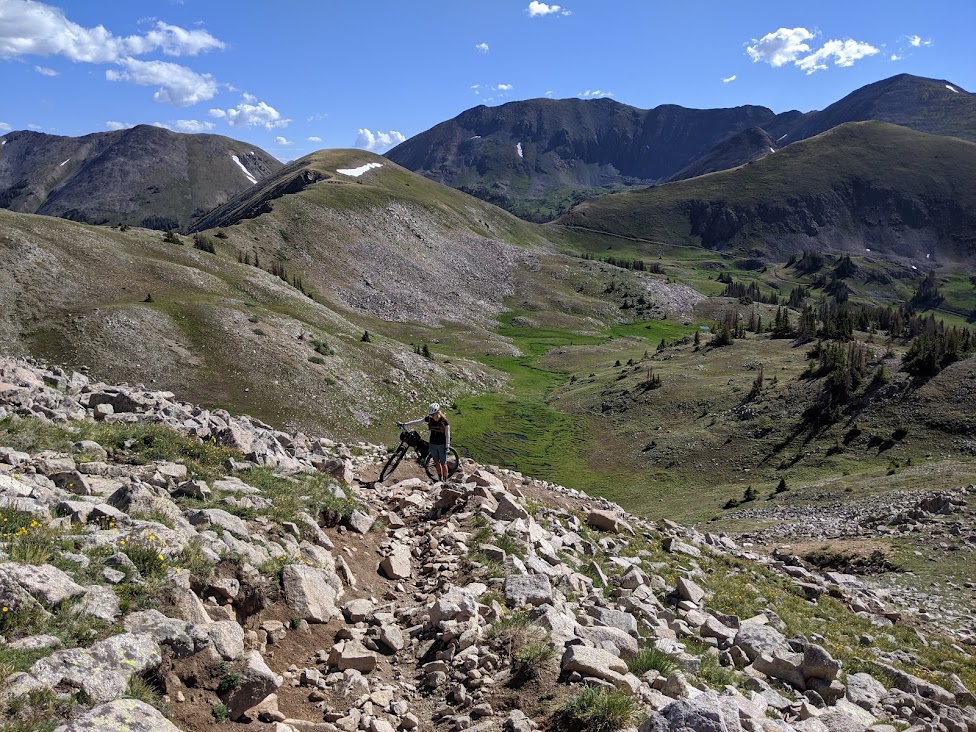 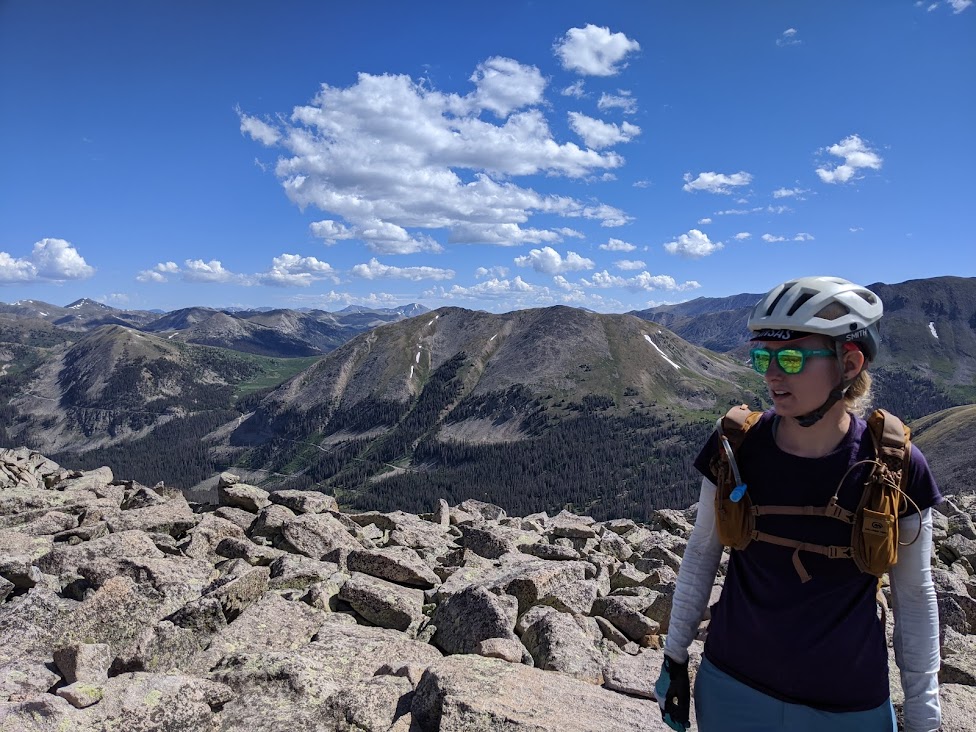 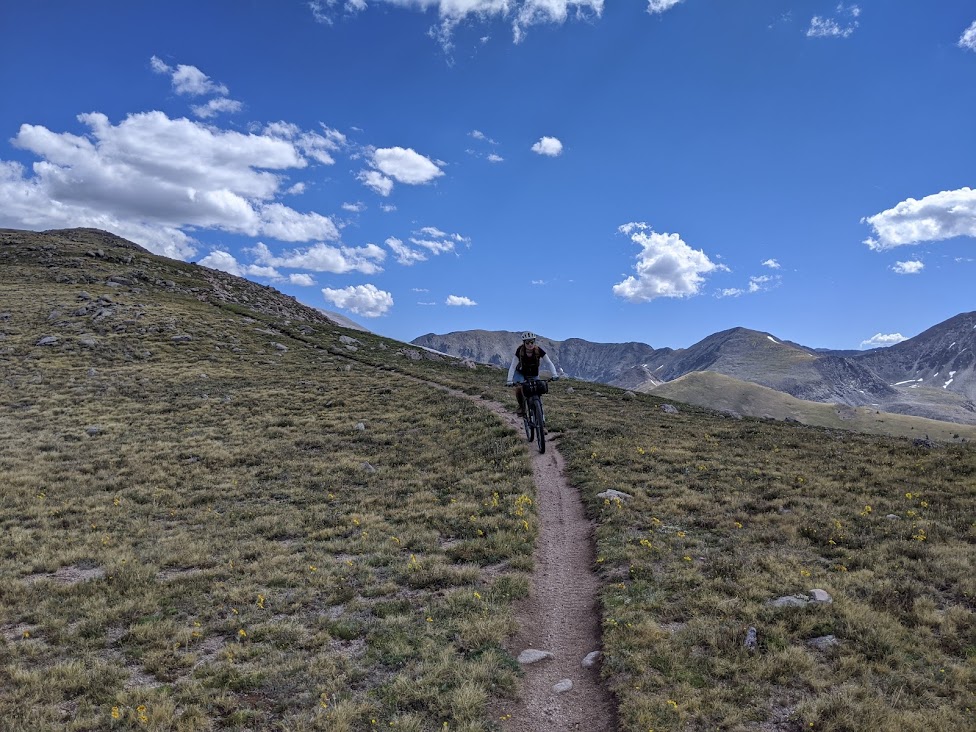 Our next climb was up Old Monarch Pass Road, a gravel road that took us to the top of the Monarch Crest Trail which traversed above 11,000 feet for some time, giving us beautiful panoramic views of the surrounding mountain range. We finally started heading down to Marshall Pass, where we met up with section 15 of the Colorado Trail for a climb to intersect Starvation Creek Trail for our final descent of the route. 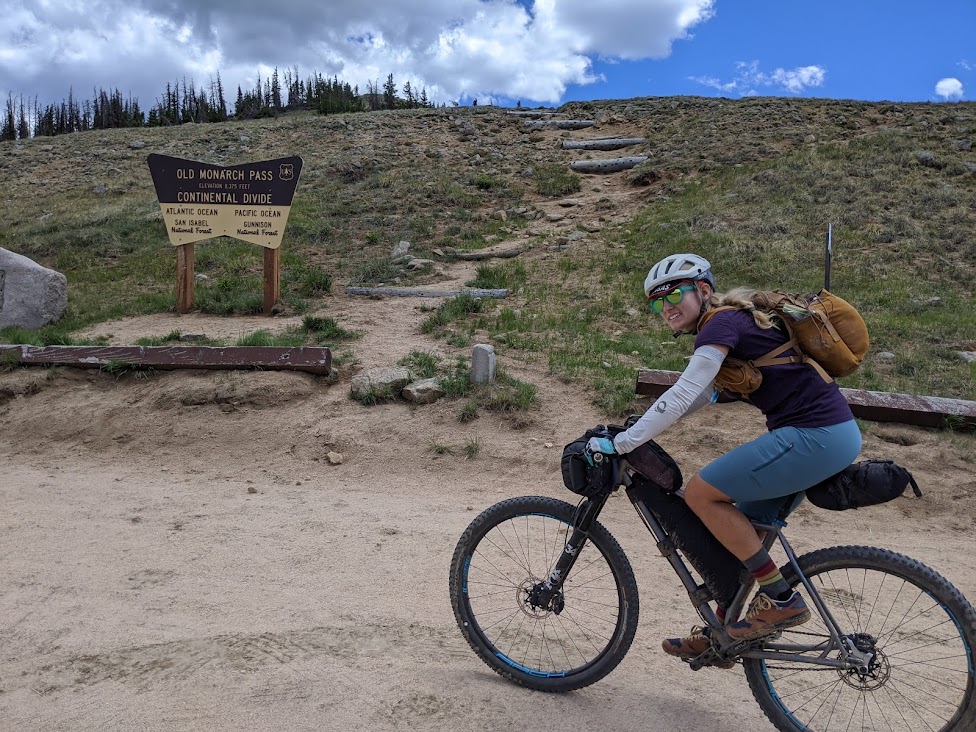 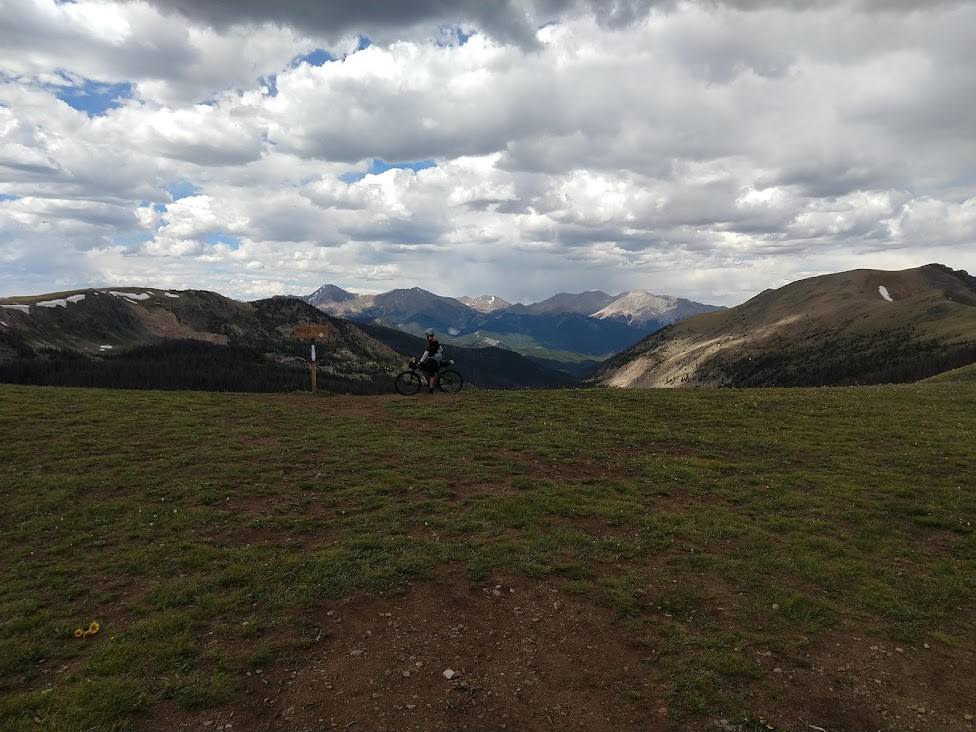 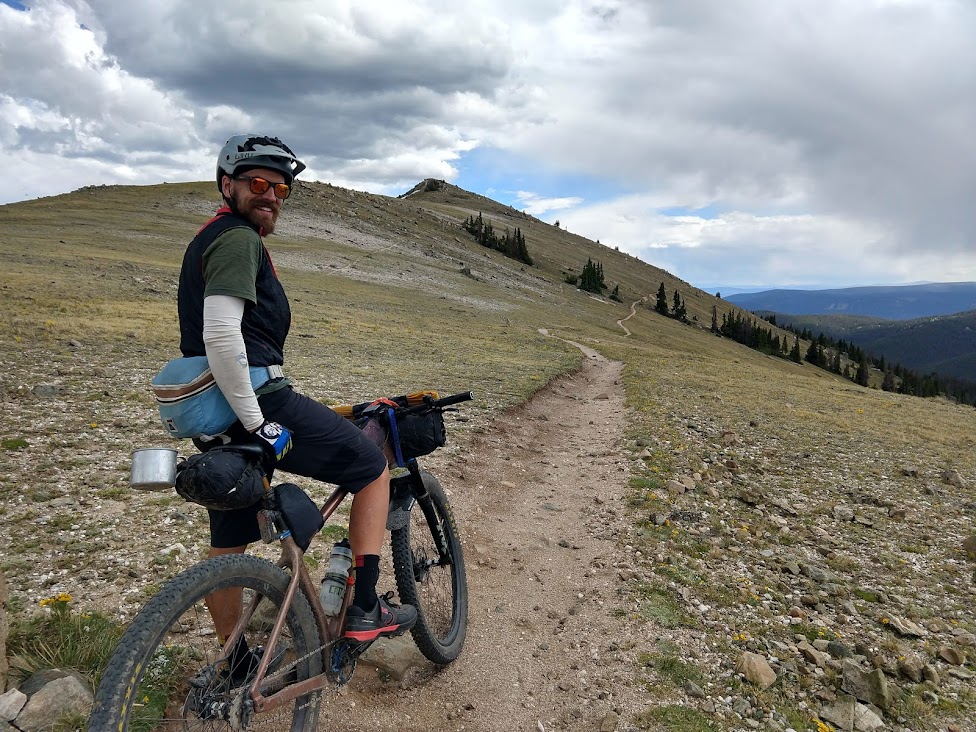 As we navigated the wooded singletrack, Andrew heard footsteps in the trees, something definitely larger than a marmot. I heard a growl, but dismissed it. My brain is pretty good at making tires on dirt sound like a bear when I’m tired. Andrew stopped 100 yards later and asked, “was there something back there?” I said, “I don’t know, but if there was, we should probably keep going!” Fortunately, we didn’t find out what it was. 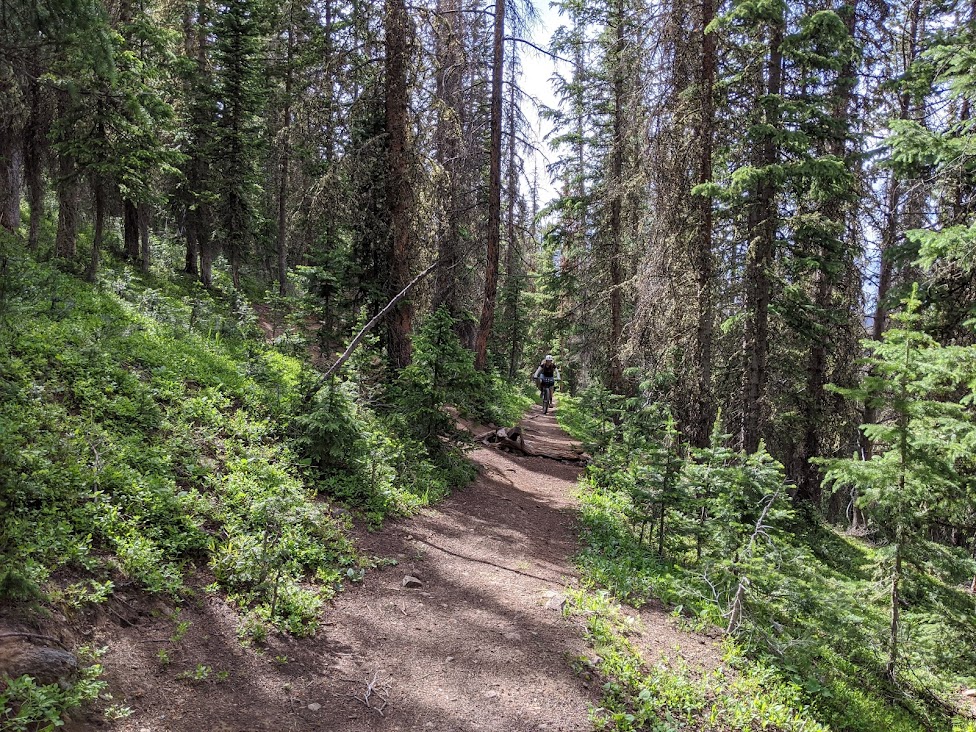 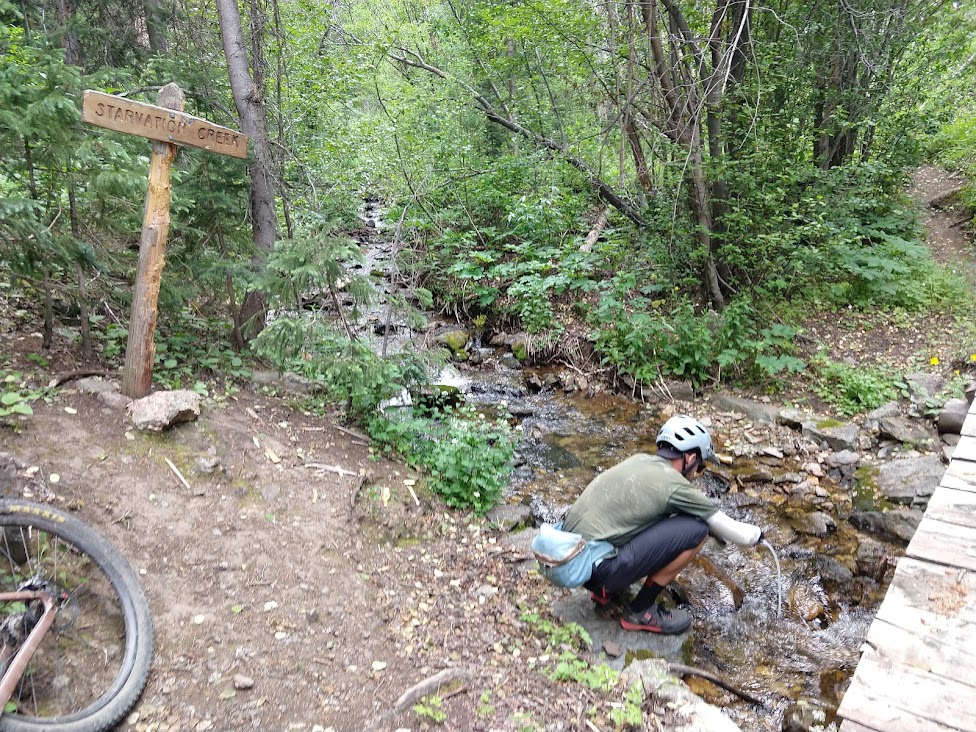 Starvation Creek dropped us out at a forest service road that intersected with Marshall Pass Road. Remember how I said we started part way up Marshall Pass instead of in Salida? Since we had the nice long paved descent into town at the beginning of the route, we ended the day with a 4 mile, 700 foot climb back to the van. That’s okay though, climbing at the end of a long day is what makes you stronger.

We got back to the van, made dinner, and talked about the last two days. The Vapor Trail offered some incredible scenery and was just the challenge we were looking for. We did a significant amount of hiking, but I’m sure if you’re a better mountain biker or better acclimated, you would hike less. 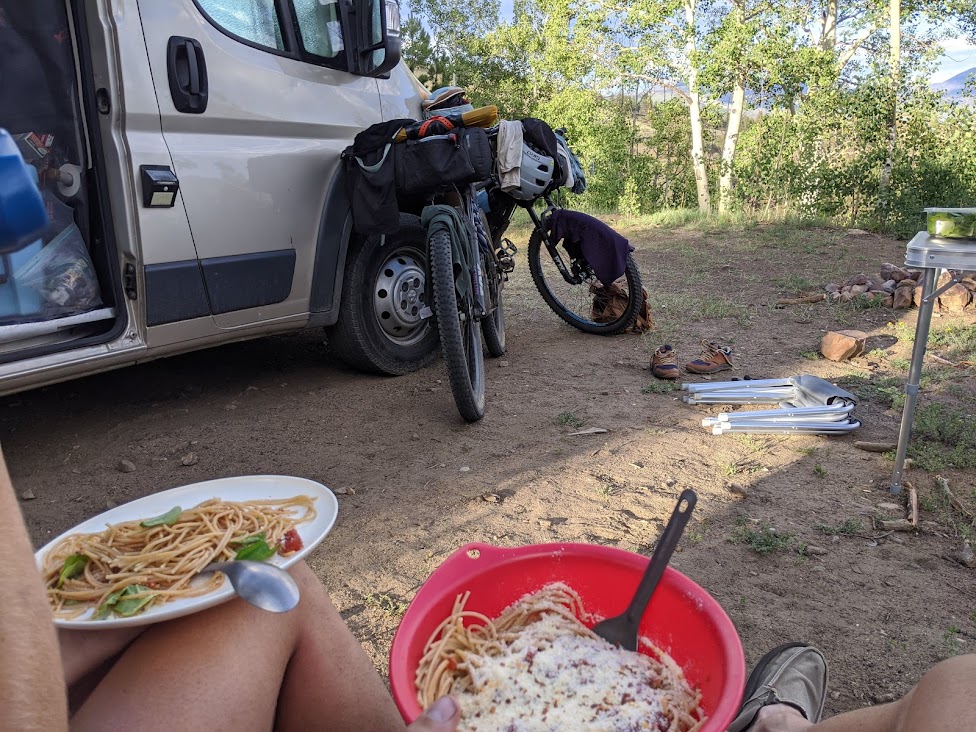 Andrew and I are looking forward to more bikepacking together. We are fortunate to have this time and know we are privileged to have this experience. Leaving Kansas City was difficult. It’s hard to leave what you know and hard to step away when you feel like you’re part of something. But you don’t know what else is out there unless you go. 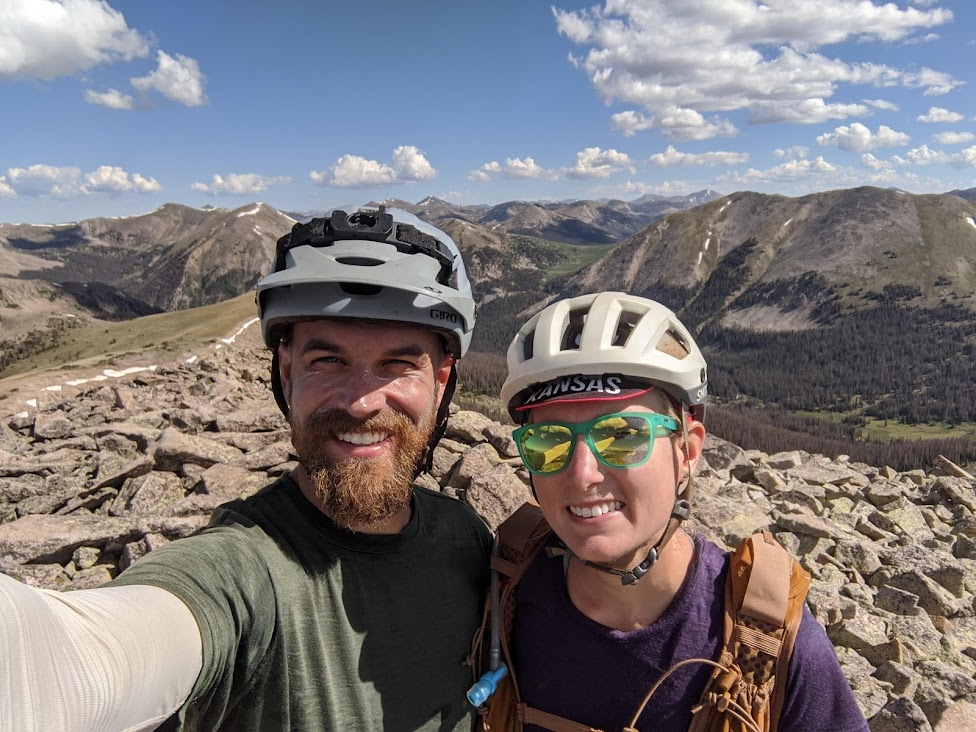