Here’s a brief recap of our experiences on Pinyons and Pines. To see a replay of the race, here’s the trackleaders page: http://trackleaders.com/pinyonspines21f.php 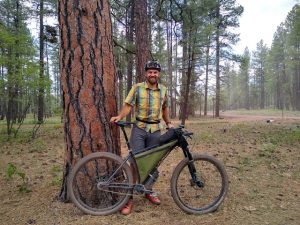 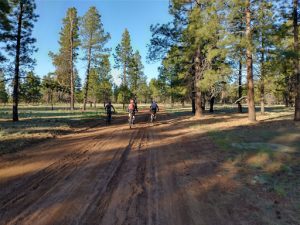 Andrew watched the lead group disappear on the gravel roads at the start of the race, and awaited the climbs to come when he could start to make up some ground. Minimizing stopped time was one of his goals for this race, so the phone and trackleaders page stayed off until late in the race. He refilled on water at a campground at mile 40, and again in the town of Jerome in a fire station restroom. The primitive road leaving Jerome was tough to ride but the views were fantastic. 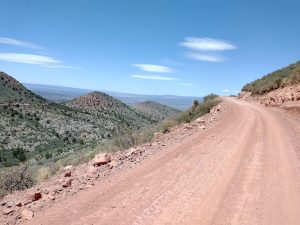 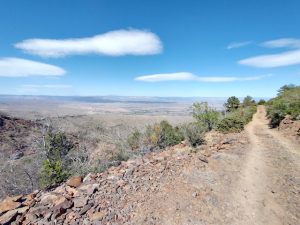 After quick stop in Camp Verde around mile 130, he pressed on into the night and slowly started catching riders he hadn’t seen since the start. 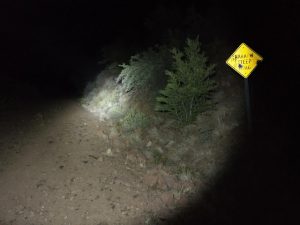 He arrived in Pine with the rain just after midnight and filled up on water at a dispenser at the gas station where Matthew was doing the same. He learned that there was only one rider ahead at that point, and was eager to get moving to keep warm. The going was slower in the rain with soft gravel roads, and Andrew was happy to be on a singlespeed with all the grit moving through his drivetrain. He saw a couple riders going clockwise on the loop (opposite from most of us) and they informed him that the lead rider was only 20 minutes ahead. It was tempting to hurry up and catch him, but with 100 miles left to race, there was no reason to burn a match. 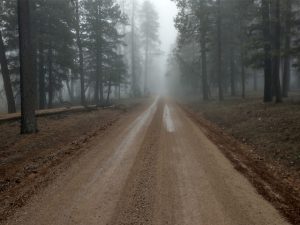 Just after sunrise, Andrew caught the lead rider, Ezra on the Houston Brothers trail near the Mogollon Rim. The last 100 miles of the course was about half singletrack, half gravel road. Ezra was on a gravel bike, Andrew was on a singlespeed geared for singletrack. Game on.

The rain didn’t stop until about 8:30am, but once the sun broke through the clouds, things dried out quickly. On a few miles of gravel after the Houston Bros and U Bar trails, Andrew periodically glanced over his shoulder, anticipating Ezra at any moment. But he never spotted him. He stopped at the ranger station on Hwy 87 to refill water and change his socks (the only time he sat down during the race aside from a bathroom stop). The next 40 miles were AZT singletrack, the sun was out, and there was a strong tailwind. After 24hrs+ of continuous riding, the bike was practically on autopilot on the fast flowy trail. Andrew attacked rocky sections, knowing the gravel and short pavement near the end of the course would again favor a gravel bike. He stopped for water one last time at Double Springs campground at mile 259 and indulged himself by checking the tracker for the first time during the race, just to see how hard he needed to climb up Mormon Mtn which was around the bend. There was a 14 mile gap! He knew that if he kept his pace under control and didn’t stop moving, there was a good shot at winning this thing. The sun was setting after a nice hike up Mormon Mtn, and the temp dropped quickly. Andrew put on all the layers he had and descended into the night.

Andrew was the first to arrive in Flagstaff. It was midnight, just over 42 hours after starting. It was a classic bikepacking race finish, in the dark with no one waiting at the finish. He rode back to the van and cooked some mac and cheese before getting a few hours of sleep. 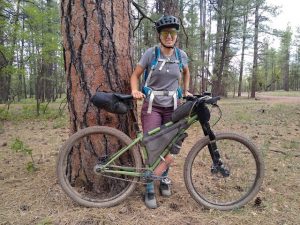 I had a lot of anxiety before this race because I’ve had lung issues during every bikepacking race and the past few I’ve done have been pretty terrible and just frightening. I made a plan to really listen to my body and to take a non-negotiable 2 hours of sleep both nights to give my lungs a rest.

Before I started the race, I wrote my usual mantra “growth > comfort” on my handlebars. I also wrote “don’t blow up” because I have a tendency to go out too hot and suffer later. This time I knew the beginning of the race included a significant number of flat gravel miles and that I’d need a reminder when geared riders rode away to keep my pace and ego in check. 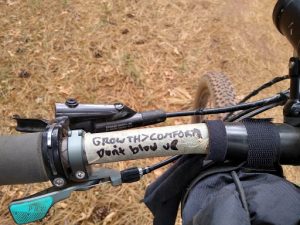 I started passing people about 6 hours in, descending the Great Western Trail down to the Verde River. I was pumped because I saw this as proof that my skills were getting better- I almost never pass people on a descent. My legs felt great and I steadily climbed from the Verde, picking off racers who had the advantage of gears on the previous flat miles. After it topped out, I coasted the free miles down to Jerome before riding up Forest Road 413, one of the highlights of the route for the fantastic riding and views. That was the first time I saw Liz since the start of the race, but didn’t get quite close enough to say hi before she rode away from me again. I caught Liz and Artec at Camp Verde, the only food resupply I chose to make along the route. Liz passed me again along the gravel road a little over an hour later. I was starting to drag riding in the dark and camped from about 11:45pm-1:45am. I didn’t do much sleeping, but promised myself the 2 hours of rest so I laid there anyways. It didn’t help that it started raining. I kept thinking the rain would pass soon. After all, there was only a 20% chance. We had mud for a few hours, but fortunately when the sun and wind came out, the ground dried quickly. I didn’t see many tire tracks on the road and decided to check the tracker for the first time on Rim Road around mile 185. What? Where did everyone go? I was in third place behind Andrew and Ezra. Liz and Alexandera were not far behind me, so I kept on the gas. 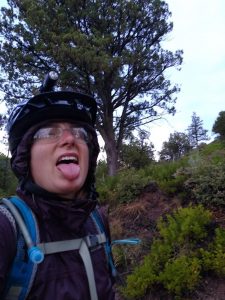 Aside from being much colder than I anticipated, the rest of the ride went to plan. There was more singletrack and slow miles at the end of the race. I loved spending so much time riding trail and feeling like my bike was just an extension of my body. The second night arrived and I chose to sleep a little earlier from about 10pm-12am. I heard Liz pass me just before my alarm went off and she slept not long after she passed me. I took 2x 20 minute naps during the rest of the night when I started feeling groggy or my lungs started wheezing more to keep my body feeling good. I arrived atop Mormon Mountain at sunrise. The moment I saw the sun, I had a huge burst of energy and rode it all the way back to Flagstaff where Andrew, Dana, and Ben were at the finish. I took 51 hours and 45 minutes to complete the route and was ecstatic with placing 3rd overall and being the first woman to cross the line after a close women’s race. A couple hours later, Jeff and Nelson, two more singlespeeders finished, making the first 4 of 5 finishers singlespeeders. You can check out the rest of the results on the Pinyons and Pines website. 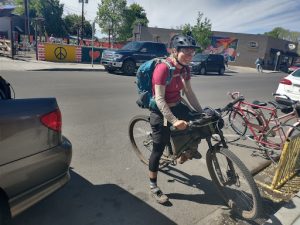