We’ve been waiting for the right weather window to ride The Ouachita Triple Crown route for a while. With freezing rain in Kansas City and highs in the 50’s in Hot Springs, AR, we knew this was the weekend to head south.
The bikepacking.com routes make a spur of the moment trip easy to do. The person who contributed the route (Kenny Williams in this case) already did the logistical research. All we had to do was go over that information, double check resupply points, and download the course to our Garmins.
We didn’t pack particularly light this time. We brought along a backpacking stove and dehydrated meals since we planned to have a significant amount of time at camp.
We arrived at the North Fork Lake Trailhead late Friday night with our friend, David. We were glad to sleep in the van because it rained quite a bit that night.

After our night in the van, we got up and took our time making coffee and oatmeal. 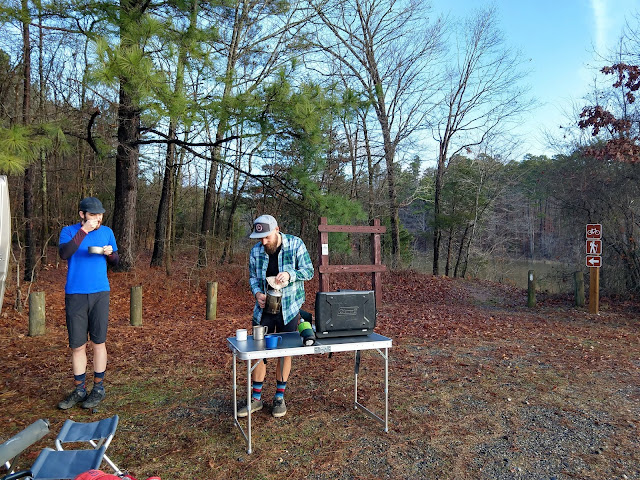 The route starts on the Womble Trail. 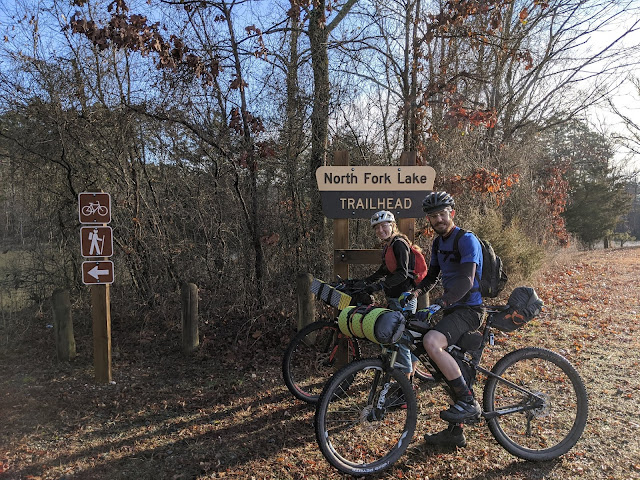 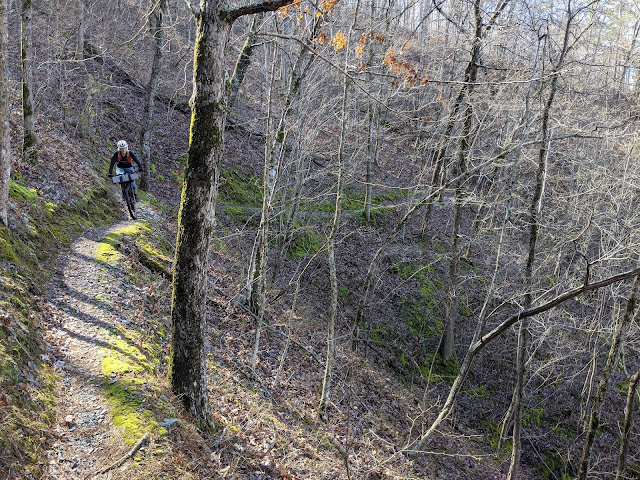 The ups and downs start right away and we warmed up in no time. The Womble Trail had plenty of climbing, lots of bench cut hillside riding, and enough creek crossings to keep things interesting.  There were no resupply points along the Womble Trail or the Ouachita Trail so we had to filter our water and carry enough food for the first two days of our ride. 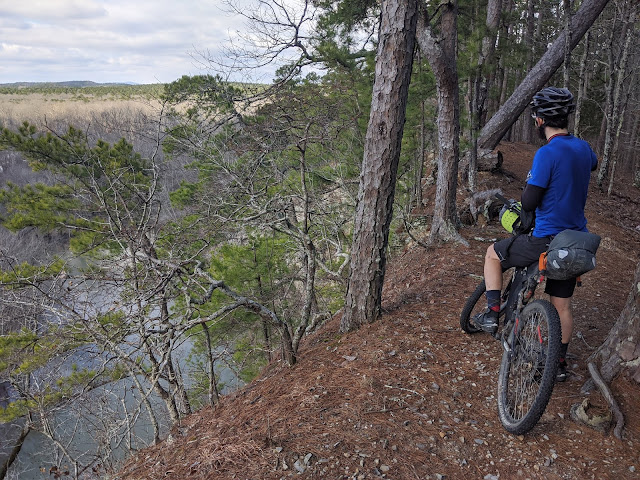 34 miles in, the Womble Trail connects with the Ouachita Trail. The bikepacking.com article describes the OT as a hiking trail you are allowed to ride mountain bikes on, and the grades sure confirmed that. 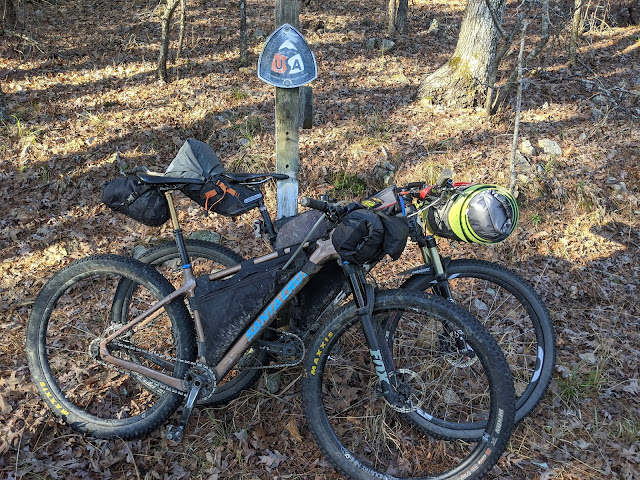 We had a little taste of the OT on Saturday before stopping at a shelter along the trail. 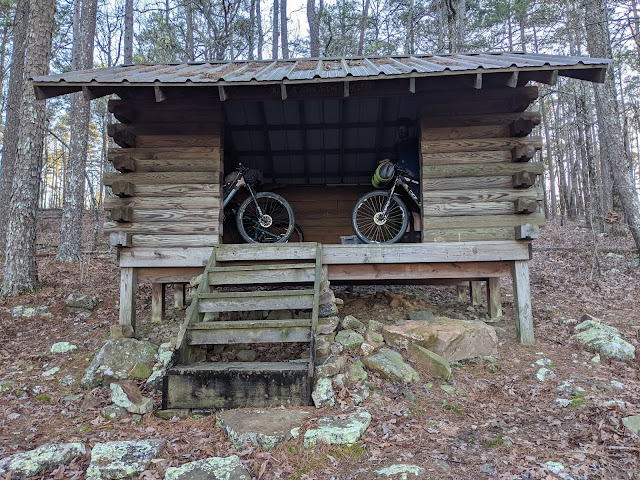 We sat and reflected on the day, cooking our dehydrated dinner. Against my better judgement, I followed David’s lead and we all fell asleep not long after 6:30. By the time midnight rolled around, I had trouble making myself sleep and staying warm for much longer.

The alarm finally went off at 6:30. We made oatmeal for breakfast, still sitting in our bivys. We had 33 miles to go on the Ouachita Trail. The never ending climbs at tough grades were a draining, but welcome challenge. We were on and off the bike a lot, pushing when the trail got too steep to ride. 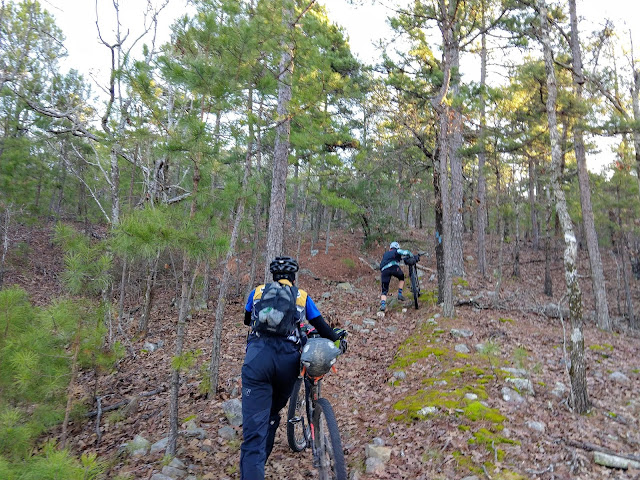 We were banking on a water stop in Mount Tabor at the church or fire station. Unfortunately, we didn’t have luck finding a spigot at either place, so we filtered water a little further down the trail instead. 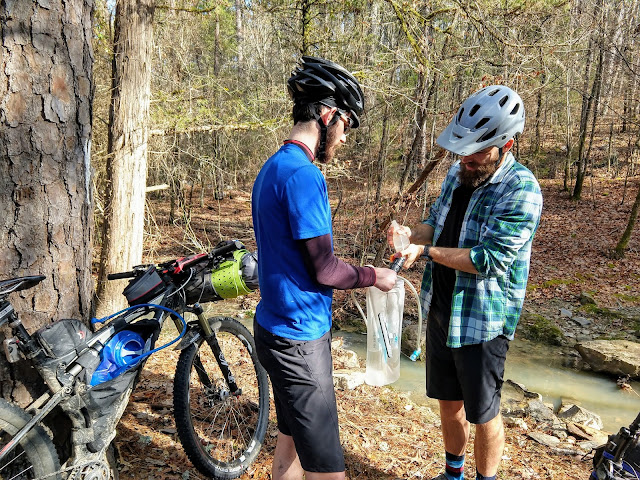 The afternoon on the OT featured more of the same long and slow climbs, but the weather was perfect for riding and hiking in the woods. 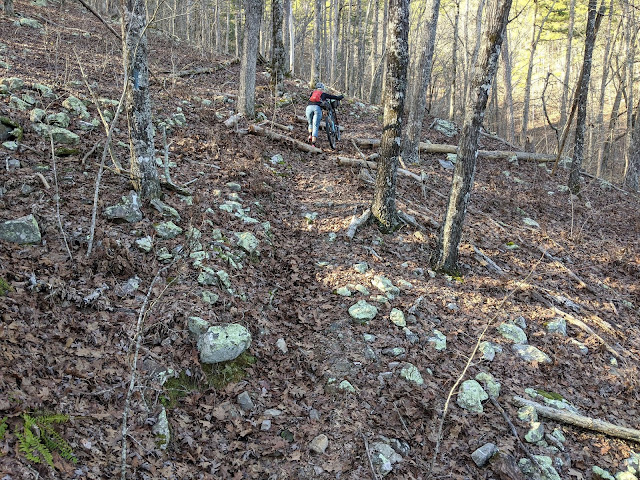 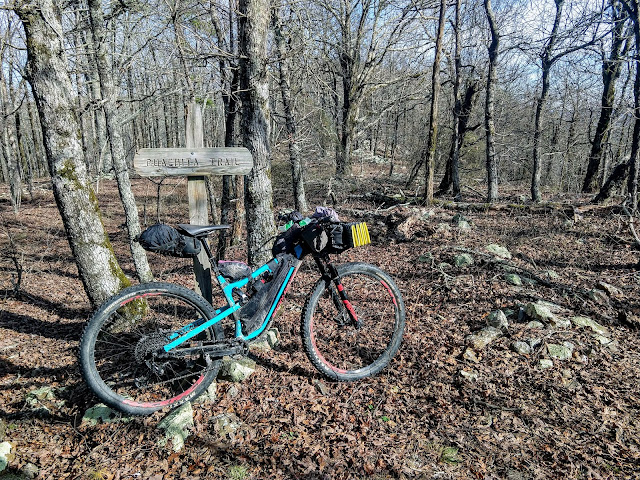 We finished off the OT section at about 3:30pm. We still had 20 miles to get to our resupply just outside Mountain Pine, but we only had gravel miles left and we knew we could move at a much faster pace on the smooth and graded roads. 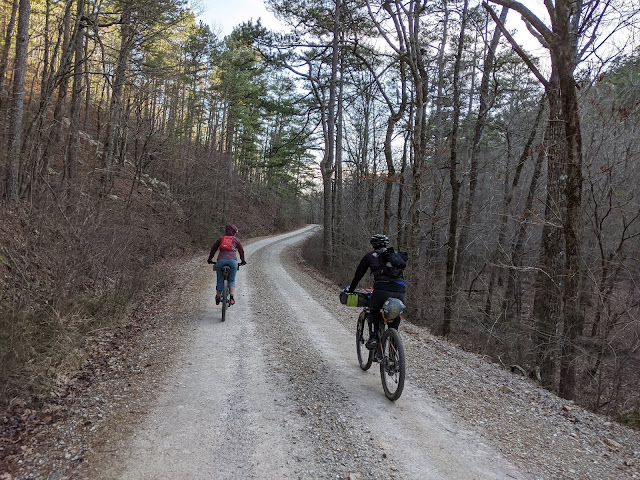 We finally made it to the convenience store at 6pm after putting a tube in Andrew’s tire with a sidewall tear along the way. We missed our goal of being done before dark, but pushing on was worth it to have an enormous dinner. We met some friendly guys at the gas station who gave us a recommendation for where to camp that night. One of them said the spot was 7 miles away and the other said it was 2.5 miles away. When David asked for clarification, one of the guys said, “Ah, are you going to listen to that guy? He doesn’t even like to ride his bike, he’s a skateboarder.” We had a chuckle and were optimistic that he was right about the 2.5 miles. He was.
We found the camping spot at Blakley Mountain Dam in Mountain Pine. We thought it was pretty ironic that we spent all day in the woods but ended up camping in town. Oh well, it was our best option at the time.
I was determined to stay up later tonight, especially with colder temps (24 degrees) ahead. We made a fire and made it until about 10:00. Andrew generously switched pads with me. I was stubborn about taking a foam pad and he brought a warmer insulated air pad. He claimed he was warm enough except for his feet. I was mostly warm as long as I stayed curled up in a ball.
The guys were convinced we could finish tomorrow and I was a bit skeptical. We all wanted to be back to the van before sunset the next day so we didn’t have to spend the night outside with the predicted low at 20 degrees for Monday night.

We woke up earlier on day 3 to get started right at sunrise. The nozzle to my hydration bladder was frozen for the first few hours and I just about broke my teeth trying to eat a granola bar. 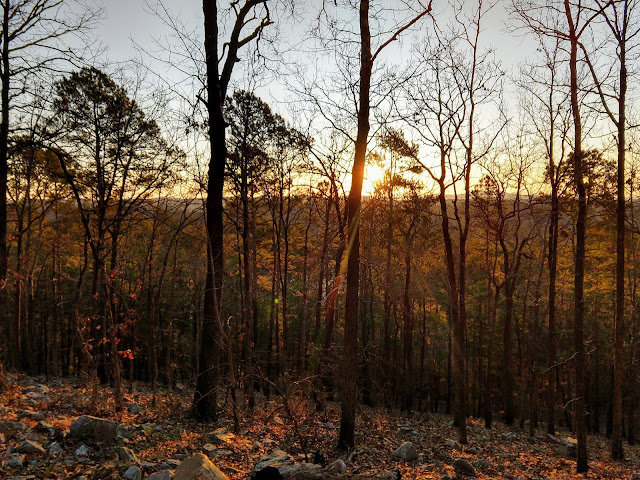 Today we would ride the entire appropriately named LOViT (Lake Ouachita Vista Trail). David’s review of the trail: “I loved it” and we all did. We still had some gnarly sustained climbs but were able to stay on our bikes much more. We could really rip the fast, open, and flowing downhills. 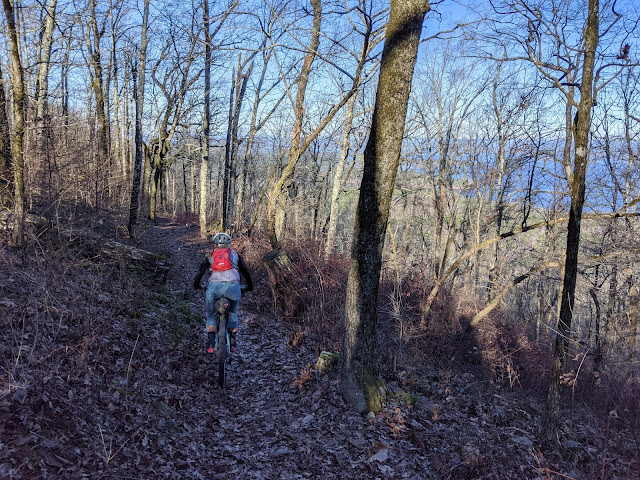 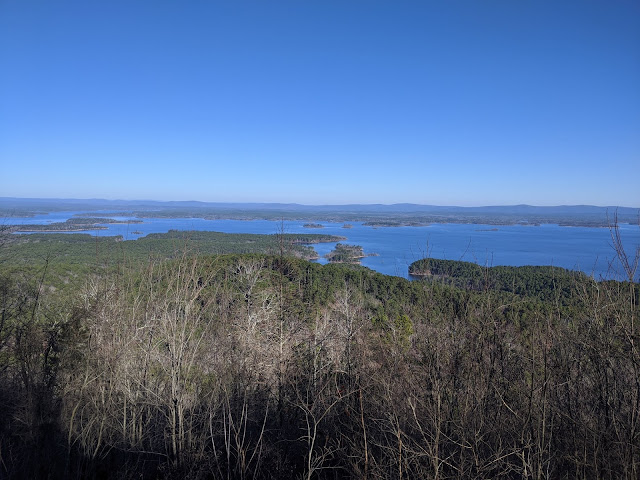 At the end of the LOViT, we had 27 miles of forest roads, gravel, and pavement before we finished the route with one mile on the Womble Trail to get back to the trailhead. 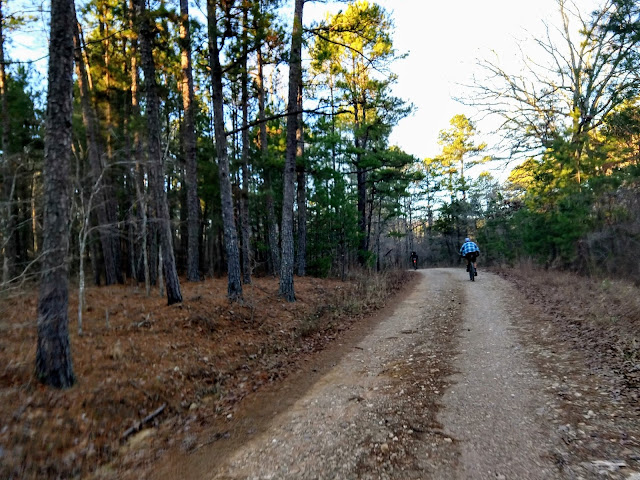 We arrived at the van as the sun was setting; the guys’ optimism was on point. We warmed up the frozen burritos we carried all day, made a fire, and watched the stars before we cozied up in the van. I fell asleep thinking about the giant breakfast we’d have at the Mt Ida Cafe. 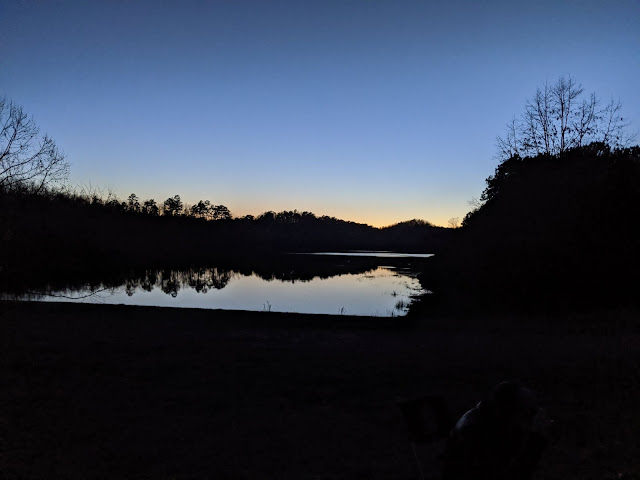 To be honest, we really underestimated the difficulty of the route. All the climbing meant some sections were grueling and slow, but those sections didn’t come without the reward of a baller downhill. It was pretty incredible to connect that much singletrack with very little pavement (less than 10 miles overall) and being out in the woods for days does the soul good. If you’re thinking about doing the Ouachita Triple Crown, we’d say go for it and don’t forget your climbing legs. 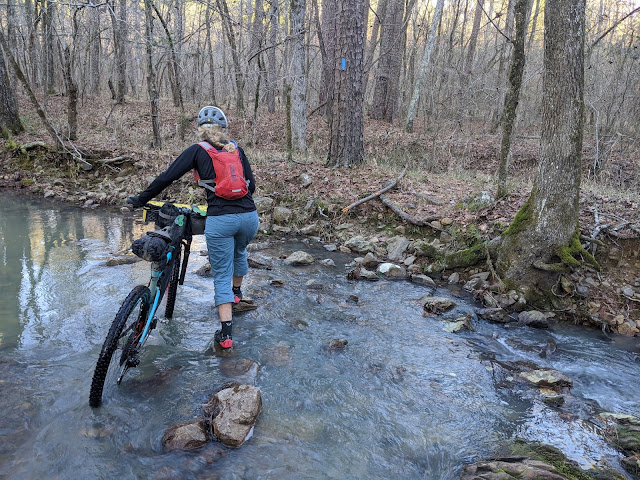