Andrew, David, and I planned the second annual Kansas Brewery Triangle. Our vision was long days on the bike in search of beer: A quick 100 miles to Emporia to visit Radius Brewery, then an afternoon ride up to Manhattan for dinner at Tallgrass Taproom. We’ll ride a few miles outside of town to camp. 185 miles on day 1. On day 2, the route goes to Lawrence, stopping at Lawrence Beer Co. A quick ride back to Olathe will sober you right up. 135 miles on day 2.

Last year, we did the triangle in 3 days, a more manageable feat, but Andrew and David were trying to save their PTO. Believe it or not, very few of our friends were interested in embarking on this journey on a weekend full of media hype about severe thunderstorms. Nevertheless on Friday night, Andrew programmed the coffee maker for 4am and told our friends we’d be ready to roll at 5. At the start, the weather couldn’t have been better, 70 degrees and minimal wind. Walter and his brother Ben had plans that evening, so they rode with us for a few hours before they turned around and headed home. That left Andrew, David, and me to make the rest of the trek to Emporia. Sometimes people ask David what it’s like being the third wheel, but if we’re really being honest, I’m the third wheel to these bros. We got into a groove and made a quick Casey’s stop in Lyndon to grab a few snacks. David checked the radar on his phone and we concluded that the storm might beat us to Emporia, so we hustled out of Lyndon. About 20 miles outside of Emporia, we started hearing more thunder and seeing lightning strikes in the distance. We were riding through rolling hills with not a whole lot in regards to shelter or even trees. As we got closer to town we started looking for shelter. I joked about joining a huddle of cattle, fortunately it didn’t come to that. 5 miles outside of town, the sky turned from day to night in a matter of seconds. We made a quick creek crossing and pulled into a driveway. We knocked on the door to ask for permission to stand on their porch, but all the lights were out and it appeared that no one was home. We stood on the north side of the building where even though there was no roof over our heads, we were protected from the sideways rain. Once the cell passed, we took the most direct route to Radius Brewing Company through steady rain. 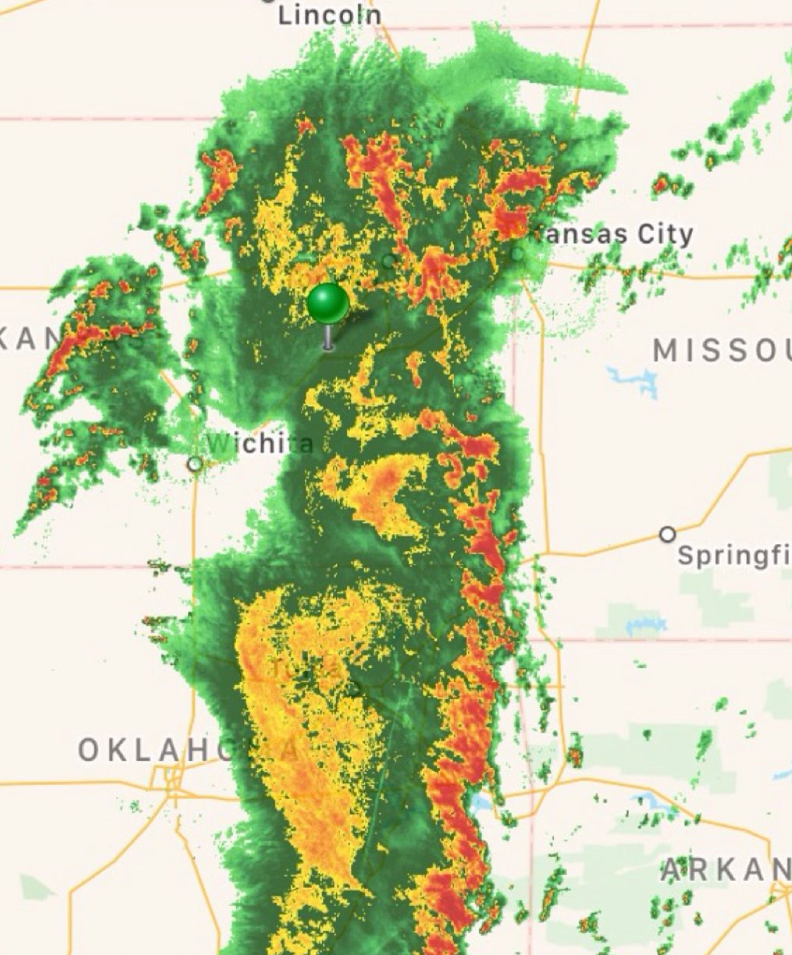 We rolled up to the fenced in patio entrance for a safe place for us to leave our bikes. We stood out in the rain for a few minutes trying to drip dry a bit and contemplated whether they would even serve us inside. I headed to the bathroom, crossing my fingers there was a hand dryer so I could feel a bit less like a wet rat. I had no such luck, so I washed my face and ran the hot water over my hands for a minute before I headed to the table. We drank our beers and scarfed down our lunch as we poured over the radar, making a plan for the rest of the afternoon. If we waited out the current storm, we’d have a nice window where we could stay dry and make it to Manhattan. David gives us a hard time for some of the weight sacrifices we make for our sleep systems. For that reason, he assumed we didn’t bring extra socks for the weight savings. When we realized he was the only one without dry socks, we went to Gravel City to buy a pair. Mel greeted us and immediately had coffee in our hands. We’ve had a lot of rain lately in Kansas and the risk of hiking through mud and flooding on our route very was real. Aaron knows the gravel roads around Emporia well and he rattled off route suggestions with his eyes closed. We looked at the map, trying to keep up with his thought process and between the three of us, we thought we had it. As we were about to leave, Ryan who is a DKXL veteran walked in and we were able to pick his brain for advice- his two tips were don’t go out too fast and don’t stop for too long. That reminded us about how long we had been stopped in Emporia. We were going on 2 hours and our weather window was now open. We finally got back on our bikes and headed for destination #2: Tallgrass Tap House in Manhattan. We decided to forgo a convenience store stop in Emporia and roll to Americus to restock our water and snacks. Since we had moderate temperatures and the capacity for plenty of water, we stocked up on everything we needed for the remaining 70 miles to Manhattan. As I walked out of Casey’s, an older man in white velcro shoes, dad jeans, a polo, and wire frame glasses was talking to Andrew and David, “is that pretty little thing with you too?” I felt the hair on my neck stand up. Believe it or not, I don’t find being called, “that pretty little thing” very flattering. He made some jokes about whether I would trade Andrew for him. I must’ve done a terrible job at hiding my discomfort, because he handed me a Werther’s Original caramel and when I thanked him he said, “see that sweetened her up.” I took a deep breath and tried my best to remember that he grew up in a different time (he told us he was 87 years old) and that his heart was in the right place. Thankfully David was right about our weather window, because the ride from Americus to Manhattan was pretty desolate. We had mostly spongy gravel roads lined with barbed wire and cattle ranges on either side. The Flint Hills are gorgeous this time of year. I looked around and marveled at how green everything was and thought back to last year’s Kansas Brewery Triangle. It was scorching outside and we barely had enough water to get us to Manhattan. I was thankful for the moderate temperatures this year. We were watching the time and decided we better pick up the pace if we were going to make it to Tallgrass before they closed the kitchen. We detoured around a couple of B-roads to avoid hiking and we only had to get off our bikes for a couple of creek crossings. I tried my best to keep up with Andrew and David’s pace, but I was dragging on the watt sucking gravel mush. The sun went away and lighting started to light up the sky in the direction we headed. Now we were racing the kitchen and another thunderstorm to get to Tallgrass. The threatening thunder and lightning crescendoed as we rolled up to the brewery, but we made it before the rain and most importantly, in time to order food. Our friends who live in Manhattan, Ben and Raeann, met us at Tallgrass. Ben was planning to camp that evening and ride with us tomorrow. As we chatted, we noticed other patrons of the bar coming in soaked. We checked the radar and the forecast called for thunderstorms all night. That’s when we started seriously thinking about plan B. Ben is a manager at Pathfinder, a sweet bike and outdoor shop just a few doors down from the brewery. He suggested a lock-in at the shop and we jumped on that idea. After a couple beers, we lugged our bikes into the shop and changed out of our soggy chamois and into our stylish wool base layers. We set up our bivys in the loft and hung out with Ben, Raeann, and Devin and Kevin who also work at the shop. We passed around m&m’s, popcorn, and whiskey. I took a swig just to wake me up a bit. We called it a night around 1am and set the alarm for 6:30. In the morning, we packed up, put our sand covered (but dry) kits back on, and headed for a convenience store on the edge of town. I loaded up my top tube bag with snacks, downed some cinnamon rolls, and we headed for gravel. With Ben as our guide, we headed east toward Lawrence with the wind at our backs. Despite the tailwind, I was really struggling to wake up my legs. Flats were fine, but the moment the grade picked up, I was dangling. I tried my best to stay glued to a wheel. David rides with us most weekends and I’ve learned to pretty much blindly follow his line. I was following a bit too close down a descent and David bunny hopped a washed out area with some big rocks- when you’re following David and he bunny hops, you need to bunny hop. I rode straight over whatever it was, “dammit.” Not a mile later, my front tire was low. I didn’t find a puncture and assumed it sealed. Nope, a few miles later and it was flat again. This time I was able to find the hole right on the bead of the tire. Andrew picked my bike up sideways and got the sealant to find its way to the pinprick hole. That did the trick, and the tire was okay the rest of the day. It was a couple hours in and I was still crawling up the hills. I told Andrew to tell the guys they could go ahead. Ben said he was in no hurry, but David wanted to be on time to meet a friend on route. Ben and Andrew were patient with me while I continued to eat, drink, and loosen up. They talked about bikepacking and Ben stopped to pet the farm dogs we rode past. About 4 hours in, I finally felt like I could push up the hills. My body is weird like that. Andrew commented later in the day, “classic Katie, struggling at mile 10 and pushing the pace at mile 90.” We made a short detour to a gas station to get some pizza and a coke about 60 miles in. With Lawrence Beer Co on our minds, the last few hours flew by and we tackled the notoriously hilly gravel roads north of Lawrence. Once we were on the levee trail, it was easy cruising into Lawrence. We crossed the Kansas River and found David at the brewery already changed and fed. Happy to sit in a chair and not on a bicycle saddle, we chose a table on the patio and ordered our last beer of the trip. We ate a quick meal before saying goodbye to Ben and taking the familiar ride home to Olathe. We’re already planning on the Kansas Brewery Triangle in 2020 over 3 days and hoping for more company next time.