Last night we finally shut our eyes at 1am. It was warmer than the past few nights so we slept pretty well until 6am when we got up and rolled to the gas station in Seeley Lake. I ate a breakfast sandwich, breakfast burrito, and a donut. We also bought a breakfast burrito to go and lots of snacks for during the ride. We weren’t going to find ourselves in the same hungry situation we ended up in yesterday. We started out at what we like to call “extra all day pace” to let our knees loosen up. The ride from Seeley Lake had some climbing, but not near as much as yesterday. When we arrived in Ovando, we were greeted by a woman from Blackfoot Angler and Supplies. She takes a picture of each rider who comes through the town. We were surprised to see our friend from Vail we first met at the grocery store in Fernie. He was looking for a ride so he could get home because his frame cracked at the chainstay. He’s the same guy who got 40 miles from Pie Town before his hub broke, forcing him to go home last year. That guy can’t catch a break. He told us we should stay at the cyclists only cabin on route today and tackle the tough climb after that tomorrow. We said goodbye to the woman from Blackfoot Angler and her dog, Maggie and started the 40 mile ride to Lincoln. 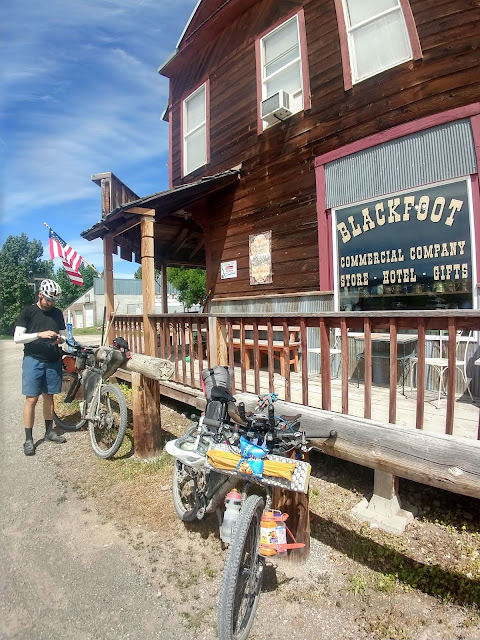 The first 20 miles was flat on a gravel road with a tailwind and the last 20 was a climb then descent into town. The Wheel Inn in Lincoln had a banner “cyclists welcome” so we stopped there to eat. They also had a tent with tools and free snacks. Before we started our next climb, we loaded up on more food at a gas station where we were questioned by several other customers. One man said he attempted to hike the Continental Divide Trail but riding sounded better. He walked to his car then came back and asked more questions about the route. Hopefully he’ll get a chance to do it. 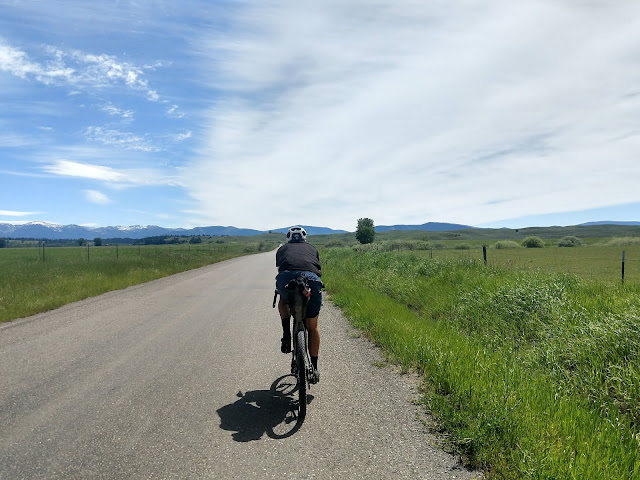 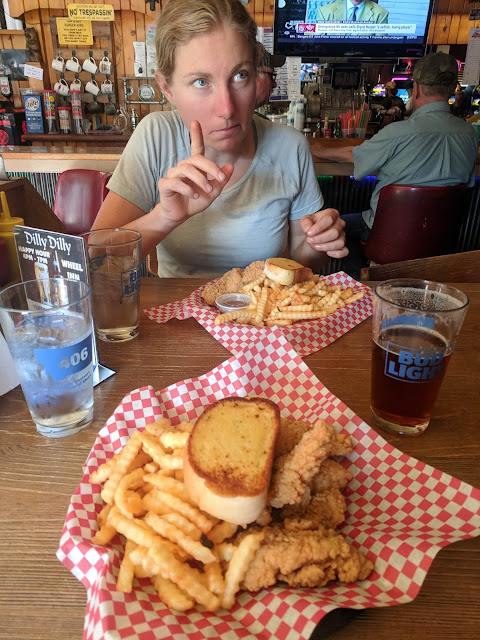 Andrew’s knees made a miracle recovery over lunch so we rode full speed ahead over Stemple Pass. It was steep and gnarly but we were feeling good and it was a nice challenge. A steep ascent usually means a steep descent so we gave our brakes a workout on the way down. Toward the bottom, the road was in good condition and we could bomb down. 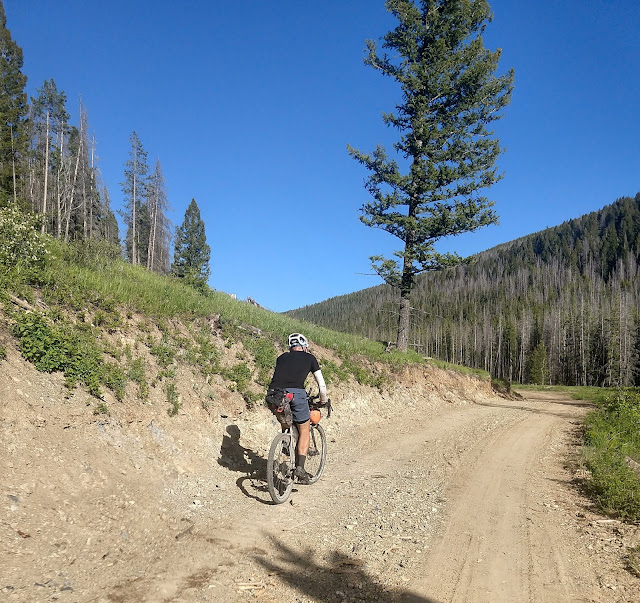 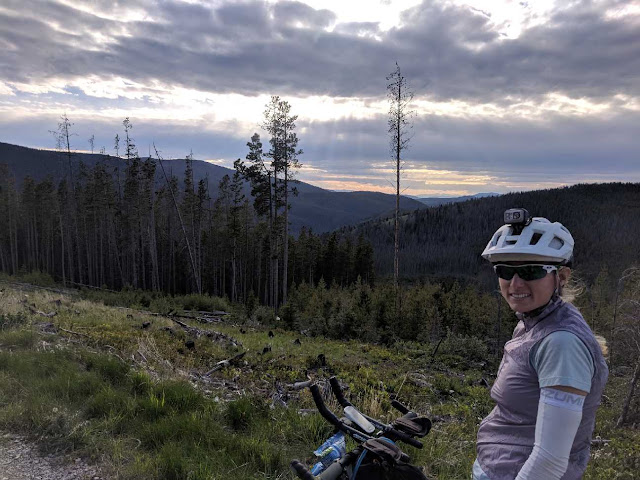 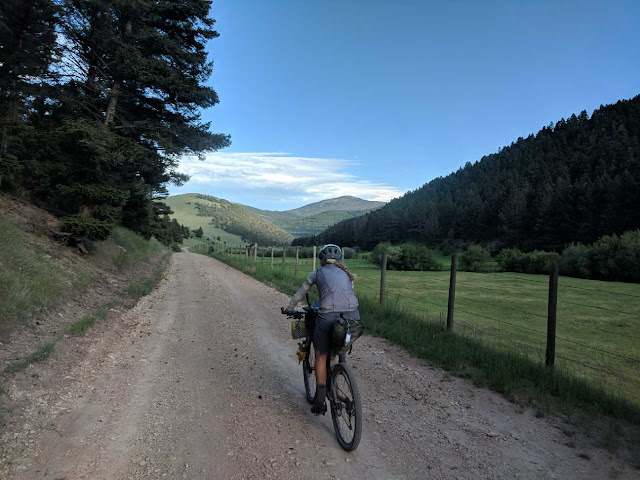 At the bottom of the climb, we were greeted by John at the cabin we learned about earlier in the day. He and the dogs were happy to see us. There were llamas and alpaca, so of course I made Andrew take a picture. We joined John, Barbara (who has lived here for 30 years and has hosted cyclists for 7 or 8 years), and a couple of other cyclists we’ve met before with a beer. We chatted about the route, technology, and wildlife. The other cyclists, one from Ireland and the other from Scotland, saw a humming bird for the first time and learned about prairie dogs- which we explained are not actually dogs. After some tea and cookies, we decided to call it a night. 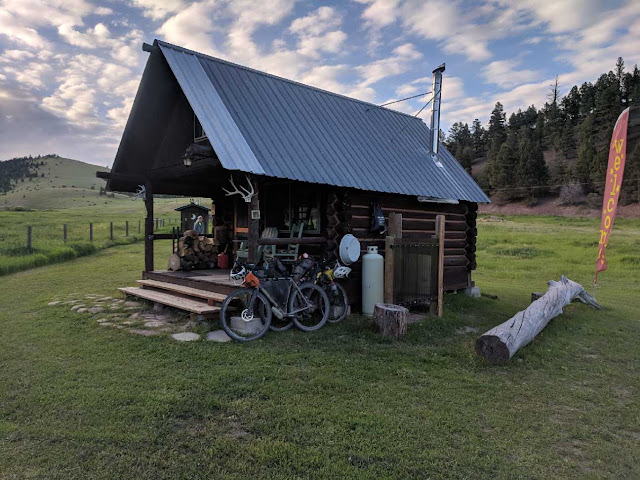 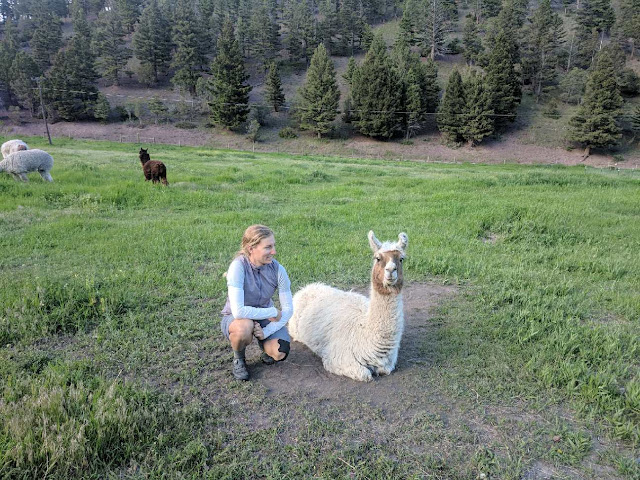 Andrew ate a hamburger and I ate a burrito we bought from a gas station in Lincoln. After we write in Barbara and John’s guest book, we’ll head to sleep. We’re glad our knees are feeling better and that today was a sunny and warm day.