Since the Divide, Andrew and I have been working on making, as Andrew says, “just the right kind of questionable decisions.” These range from weeknight overnighters, to long weekend road trips, to signing up for DKXL. I chose to apply for DKXL because I find personal growth in conquering a challenge that in some moments seems unachievable. I started working on this post while I was preparing for DKXL. It’ll be my longest race to date, and I want to remember how I felt before the race so I can better relate to and share information with other people who are preparing for their first ride of this distance as well.

I definitely had some nerves going into the event and I am so thankful for a community of friends and cyclists who shared their encouragement. You all helped me keep going when the ride was tough. It’s 2 days after I finished and I’m still a bit brain dead. I’ve had to write this post little by little. I feel mentally ready to get back on the bike, but I’m trying to be smart and wait until my body is ready. So for now, recovery hikes will do. Staying awake:
What I worried about:

One of my biggest worries heading into DKXL was about staying awake. I love my sleep and I’m pretty terrible at staying awake when I’m tired in other situations. One year for Christmas, our close friends made a calendar featuring pictures of me sleeping in different places.

To address this worry and to test our gear, we organized a 200 mile overnight ride. We left our house at 7pm and rode through the night in a group of 5 on classic Kansas gravel roads and some challenging b-roads just to keep things interesting. Our group stuck together, making a couple of Casey’s stops along the way. I really only felt sleepy once so I chomped on some potato chips and rode next to Andrew while he blasted his speaker to keep my brain alert. During the spring, I spent more time riding in the dark. That’s not usually the time I choose to ride, but it was peaceful and I began to enjoy it. May 31st was such a gorgeous night for a bike ride. I frequently covered my headlamp and looked up at the clear sky littered with stars. To get through the night, I had a coke and sour gummy candy along with some other snacks. I listened to music and stand up comedy to stay mentally engaged. Around midnight I rode by a skunk which made me wonder about their range and accuracy. I rode through the night solo, passing 8 or so people with flats or working out other issues with their bikes. I did encounter another rider around 4:30am. He popped up from a nap right in front of me and we rode together for a couple of minutes, but our paces at that point weren’t very compatible.

Andrew, on the other hand, was riding with people for most of the race. Being singlespeed, riding partners came and went during the night, but he had consistent company with Lael. They talked about riding bikes in cool places and blared Andrew’s speaker to help with the sleepies. 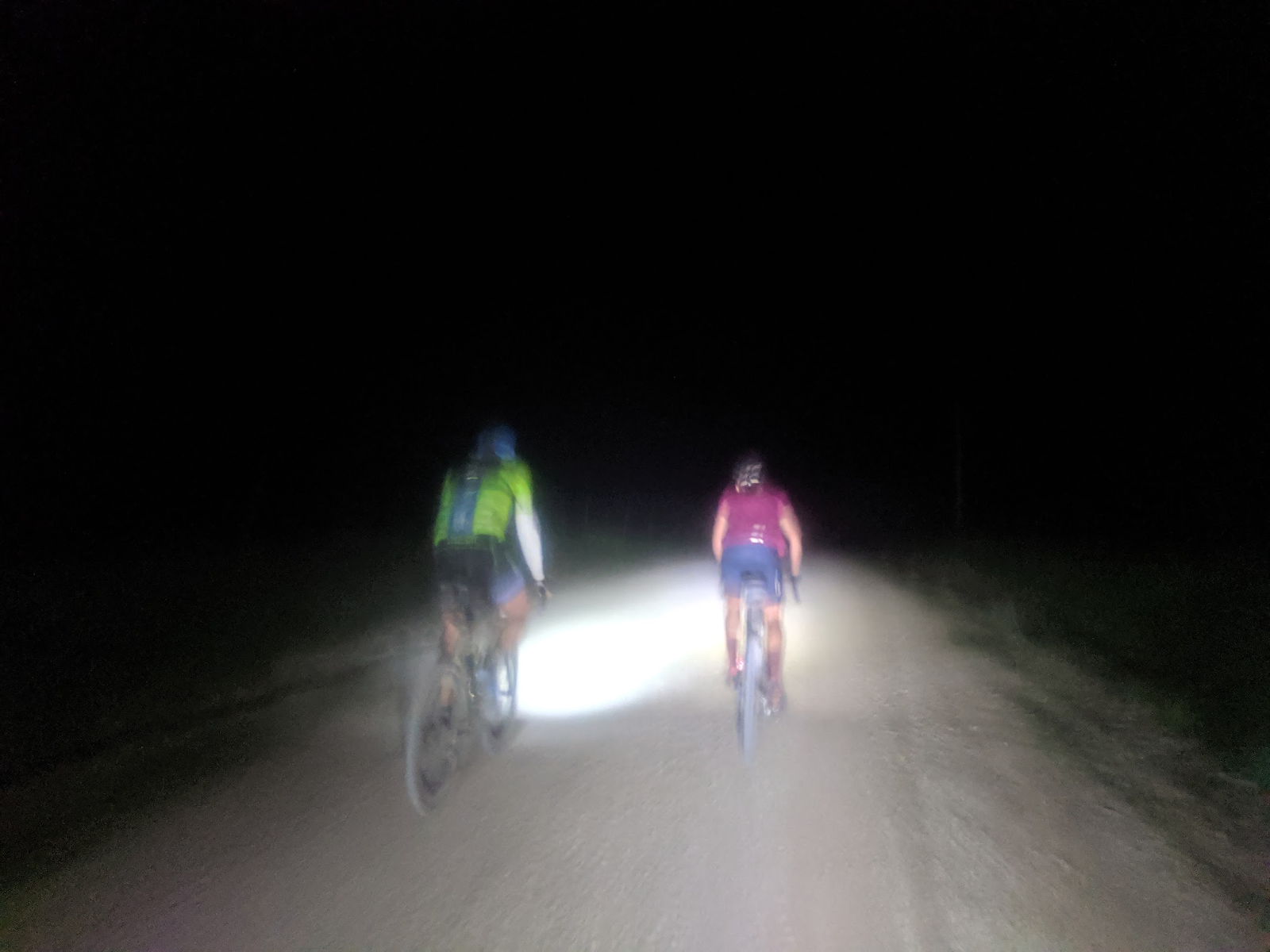 By 9:30am my speed was dragging and I was fighting to keep my eyes open. My strategies of snacking and listening to music weren’t helping, so I found a cozy spot off the side of the road, set a timer for 5 minutes and took a power nap. In hindsight, I should’ve taken that nap sooner. It was mostly my ego telling me I shouldn’t have to sleep. I was able to pop back up refreshed as I could be after being on the bike for over 18 hours, and pedal much more efficiently.

Weather:
What I worried about:

I could only hope that this year’s DKXL would bring better weather conditions than last year. Last year’s racers experienced extreme heat, a headwind most of the course, and severe thunderstorms. Nobody likes riding through thunderstorms and I’m no exception to that rule.

Since there’s not much you can do to change the weather, I spent time mentally preparing myself. During the race, I planned to tell myself, “everyone out here is experiencing the same conditions,” as a reminder to not feel sorry for myself if it’s a tough day. I took advantage of opportunities to build mental stamina riding into Kansas wind. We had a nice taste of riding in the rain and finding shelter during storms during the Kansas Brewery Triangle which helped me feel more confident and prepared. Thursday we started seeing pictures of flooding on the south portion of the route. By the evening, we had an email with a couple of reroutes to avoid walking through flooded roads. It cut the course down to 338 miles, but I figured at the end I would probably be more than okay with the decrease in mileage. I carried a rain jacket during the ride due to a slight chance of rain and overnight lows near 60. The weather conditions ended up almost perfect. The gravel was fast and the b-roads were mostly dry, but rutted from recent mud. We had low wind throughout the whole ride. It got a bit warm on Saturday afternoon, so I carried more water than I originally planned to keep hydrated. Food:
What I worried about:

Having a knotted up stomach or not having an appetite despite needing more fuel during the race. It’s tough to come back from stomach issues and nutritional deficit.

I practiced my eating and drinking strategy during training rides. I lined up at the start with a 70oz bladder of drink mix and 2 empty bottles. Our first stop was only 50 miles in, but I needed the capacity for a 90 mile stretch without services later in the ride. I carried enough powder to refill twice. I typically do okay eating just about anything on the bike so carrying more mix than that seemed excessive and heavy. I made a “grocery list” of items as a guide for the inevitable time when I arrive at Casey’s brain-dead without an appetite. 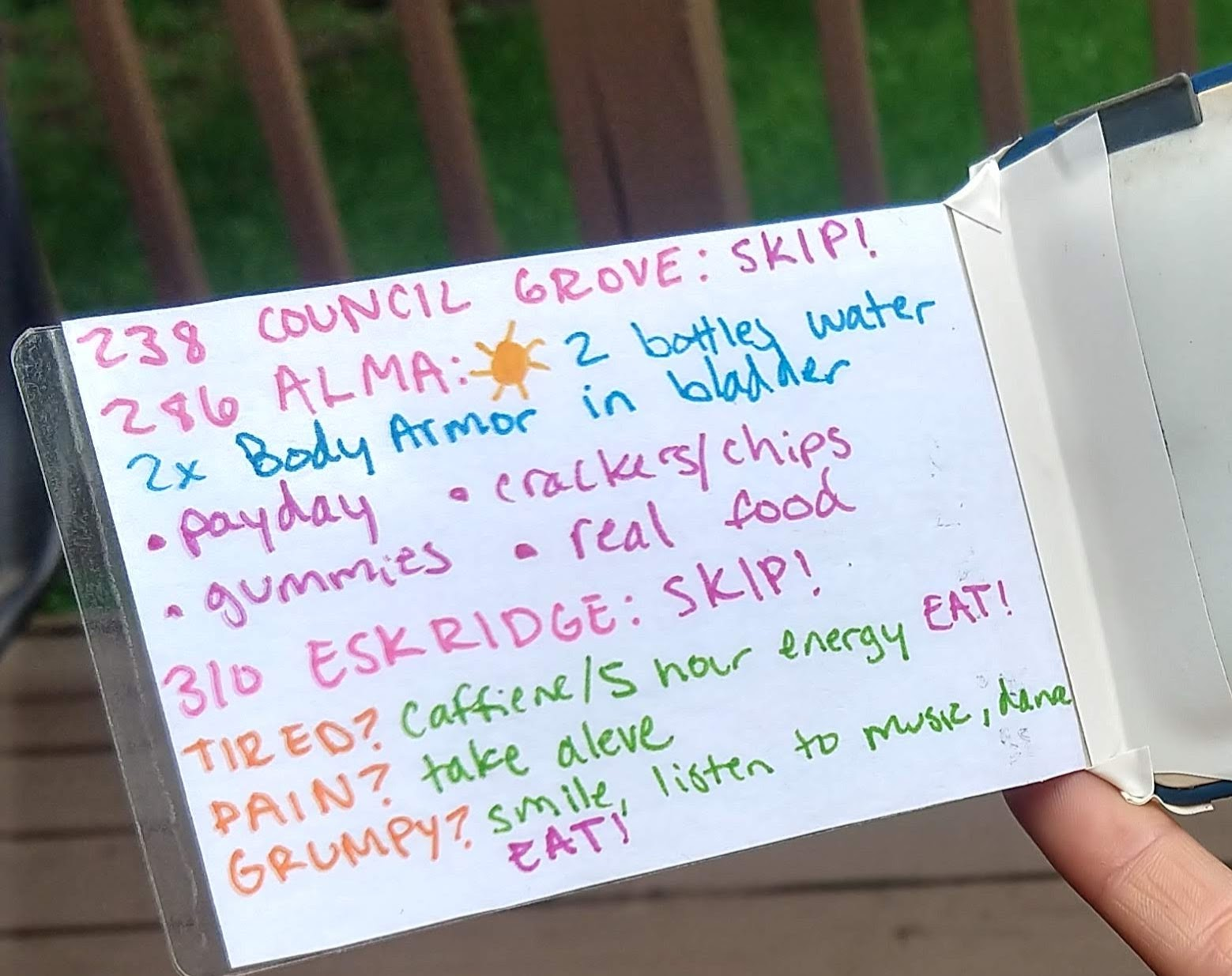 About 20 miles in, my stomach started feeling sour. Not a great way to start, and I think that’s why I had such an awkward #chasethechaise picture. I figured it was because I’m not quite used to the heat yet. I told myself it would get better in a few hours when the sun went down, and I was right. 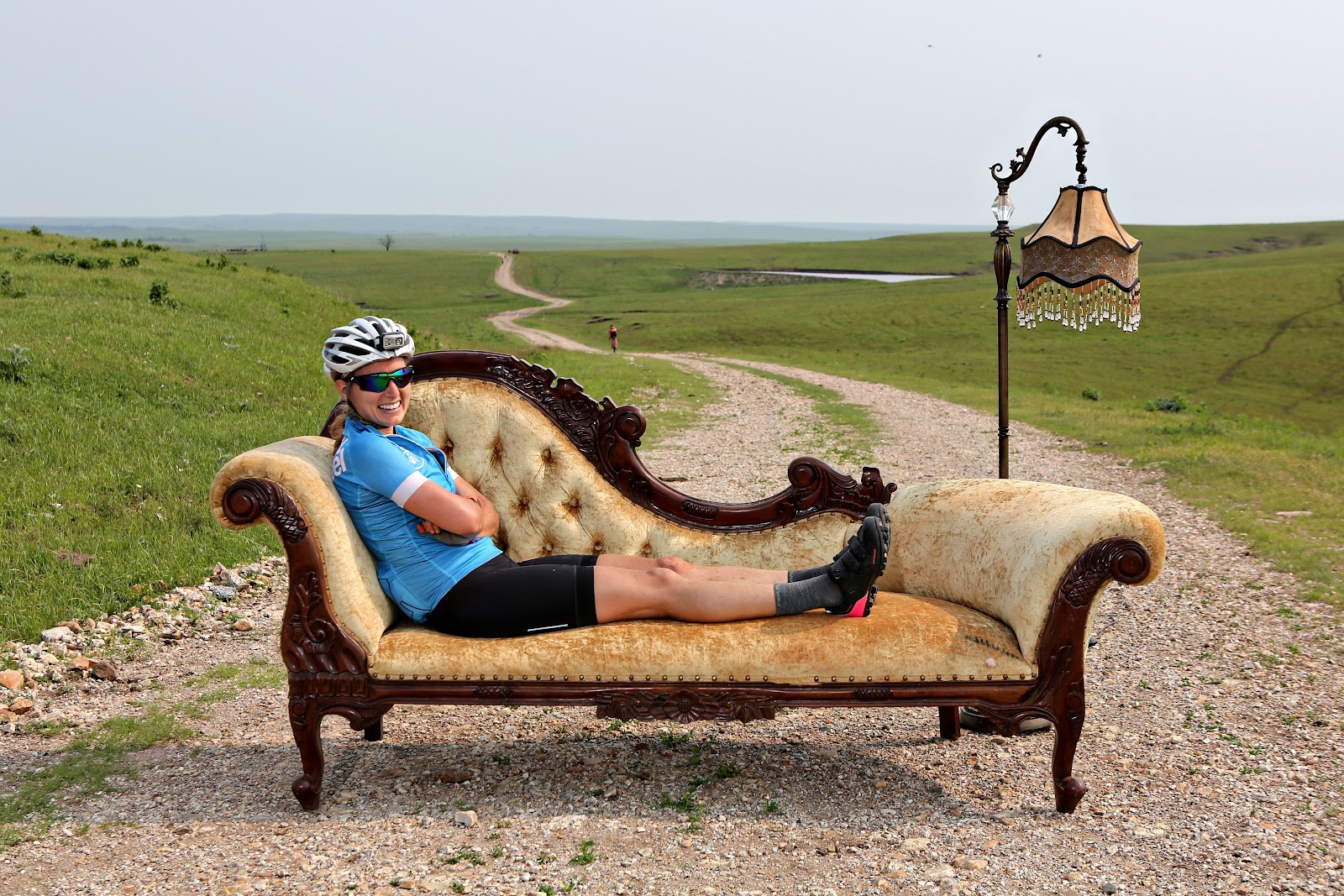 Andrew’s stop at the chaise was a fast guy party. 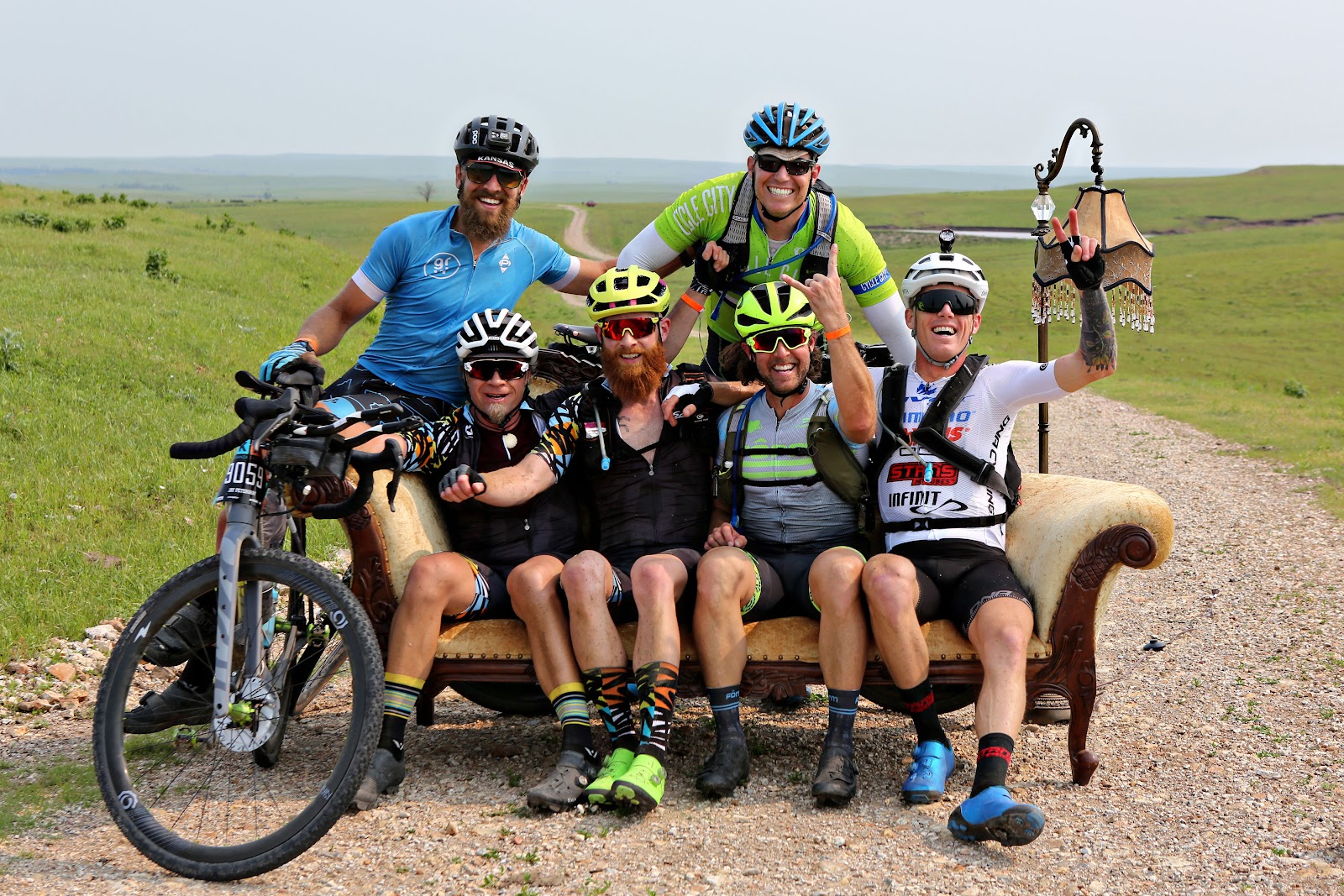 Next time I’m in a long event, I probably won’t pack drink mix with me. It’s a significant amount of weight and I experienced an upset stomach despite success using mix during races earlier in the year. I used my list as a guide to replenish my food supply at c-store stops. At one stop I couldn’t find the crackers and a bit out of my mind, I wandered around for too long before picking something else. That was a good reminder to remain mentally flexible.

Andrew packed one refill of drink mix, then relied on gas station sports drinks. He made it to Cottonwood Falls (mile 195) before the gas station opened so he and Lael topped off water at the park to go 34 more miles to Council Grove. He knew there was a possibility this would happen if things were going well, so he was prepared with enough food to make the 128 mile stretch from Eureka to Council Grove. Mechanicals
What I worried about:

Feeling strong but having bike issues that compromise my ability to finish the race.

Andrew spent so much time reviewing both of our tool kits and bikes to the point that it started to annoy me. He wanted to ensure we had everything we needed and nothing extra.  We ran through different scenarios and made sure we had the tools and knowledge to fix whatever situation we could think of (within reason).

I didn’t have any bike issues besides a couple of flats that were each solved with a plug. If you don’t already carry plugs for your tubeless tires seriously buy them right now. Andrew said he had a couple of punctures where he heard sealant spewing, but they sealed up on their own. Aside from that, the only bike maintenance required was lubing chains partway through to keep rolling smoothly. DKXL was a beautiful and brutal adventure and learning experience. Andrew and I both see more races of this length and longer in our future.