Digging out of a hole at Pinyons and Pines 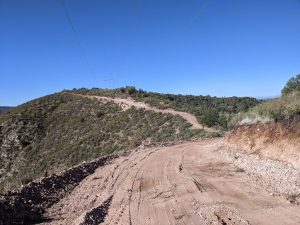 It’s been said that a bikepacking race is just as much an eating contest as it is a pedaling competition. I totally forgot about the eating contest for the first few hours of Pinyons and Pines, distracted by the race and views of Sedona I guess. 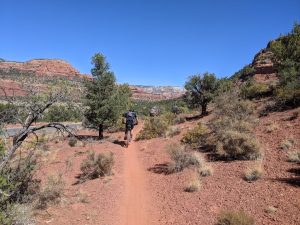 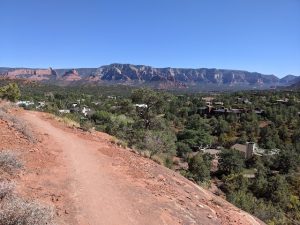 In a rush to keep moving I stopped at a small gas station in Sedona around 2pm, grabbed not enough snacks, and pressed on into the heat of the day up Schnebly Hill Rd. Partway up the climb my legs started to feel twingy, then the inside of my thighs locked up completely with stabbing pain. I awkwardly hobbled off my bike and onto the side of the road in some shade, trying to find a position where my legs would stop yelling at me. At this point I knew the mistake I had made and tried to eat and drink as much as I could to combat the cramps. This used to happen to me during gravel races longer than 100 miles, the lack of calories during the first few hours would catch up to me and my legs would shut down. I’ve learned from those experiences and started eating much more food and drink mix during races. At least until this weekend.
As a spectacle for all the Jeep tours going up the 4×4 road, I tried to nap and give my legs a break. Other racers started passing me and my motivation for going fast was disappearing. I’d battled cramps during gravel races, but usually with only a few hours left to push through. How long would it take to recover enough to ride for another 200+ miles and 20k ft of climbing? Finishing these events is my #1 goal, I wasn’t going to quit.
I tested my legs by walking up the climb, eventually crawling onto my bike and carefully pedaling within the range of motion that kept my legs cooperating. Standing on the pedals, I could still go faster than most of the jeeps navigating the road. I kept eating, while being mindful that I had 70 slow miles to go until the next gas station to resupply. I knew there was a water spigot at the top of the climb at an ADOT yard, so I drank all my water as I neared the top. 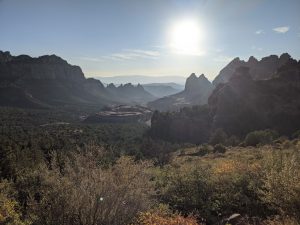 Rolling into the small residential area next to the ADOT yard, I was surprised to see a group of people at a pavilion next to the spigot. It was dusk and fellow racer Liz Sampey was already there. We learned they were celebrating a wedding that evening, and quickly offered us scotch and beer. Liz took a shot of scotch and I happily chose a coors light. Then we were offered tacos, which could not have come at a better time for me. An answer to prayer. 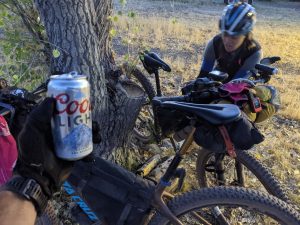 As I ate my burrito sized taco, Katie arrived and joined the wedding reception. We put on our warmer layers and headed into the night together for a few miles. Either the beer or taco kicked in, and my legs were back. I climbed away from Katie and tentatively tested my legs on some gravel roads. I ate every time I thought about it and continued on, twinge free until about 1am when I stopped on the AZT to bivy for a couple hours. I was a few hours behind where I had hoped to be by then, but with the muscle fatigue I was dealing with, I figured I needed to sleep a bit. Katie passed me not long after I got into my bivy and kept riding, apparently not tired yet.
I was stiff and a little twingy when I woke up, but loosened up on the bike. I passed Katie sleeping on the side of the trail a couple hours later.
I made it to the gas station in Flagstaff around dawn and bought so much food. I wasn’t sure if the next gas station 100mi away would be open when I got there, so I packed enough to get 150mi to the finish.
Water, chocolate milk, iced coffee, bottle of coke, ham and cheese sandwiches, big muffin, apple fritter, mini apple pie, fritos, licorice, candy bars, peanuts, crackers. This turned out to be the right call, I got to the gas station in Parks in the middle of the next night and just kept rolling. 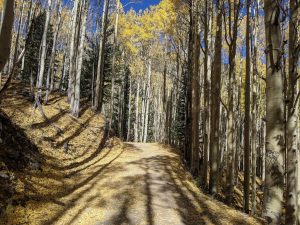 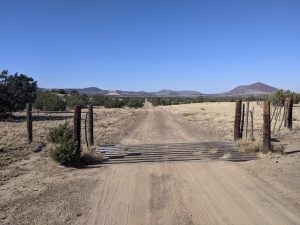 I didn’t have cramps after that ADOT stop at mile 83, although my legs felt pretty heavy for the rest of the ride. I spent a lot of time standing and pedaling, my legs seemed to handle that better. As long as I kept up with food and water, I was able to keep the pedals spinning, even though my legs felt like trash. The challenging terrain never let up, but the remaining mileage became more and more reasonable. I had some motivation the next night as I was chasing and being chased, along with the desire to finish and rest my legs. 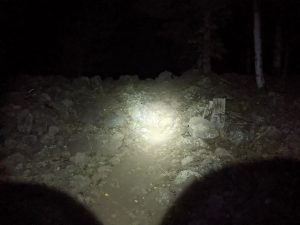 I only took a couple 15 minute naps and pushed through the night to finish at 8:40am.
It’s amazing what the body can recover from when you give it more food and water. And maybe a little sleep.